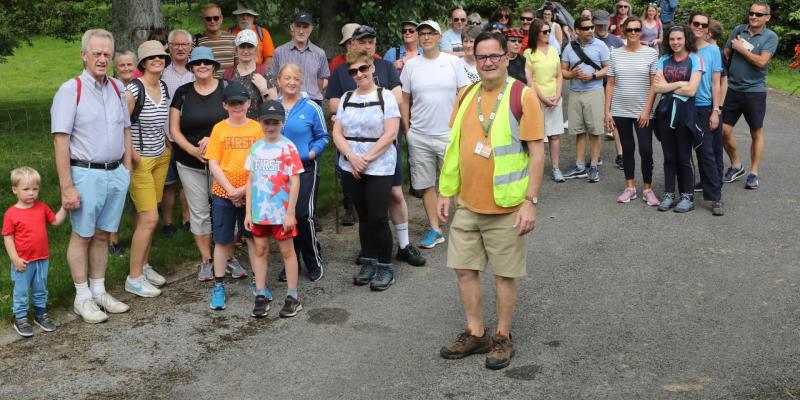 Some 160 people have taken part in a walk from St Mura’s cross in Fahan to the cross at the top of Gollan Hill to help raise funds for the campaign to save the 7th Century monument.

Sunday’s Cross to Cross walk was organised by the Fahan Heritage Group as part of its Save St Mura’s Cross campaign.

The event was the latest in the fundraising drive which began in 2019 to restore and preserve the cross slab and the graveyard it sits in at St Mura’s Church.

Work has already been carried out to remove lichen from the cross which has been affecting the visibility of the artwork, which includes inscriptions in Ancient Greek by Coptic monks. The cross is undergoing archaeological surveillance to establish whether or not it is lilting forward. The work is being carried out by Buncrana-based archaeology and conservation specialists John Cronin & Associates.

The group has already overseen the restoration of the ruins of Fahan Old Church, which was built from the ruins of the monastic buildings. That work cost €30,000.

The group has received grants from the National Monument Service, The Heritage Council and Donegal County Council.

Chair of the Fahan Heritage Group Colm Toland said the cross is in as good a condition as it is going to be. It has been stabilised and cleaned as part of the group’s work but if it is left in the open air it will continue to deteriorate. He said options are being explored on whether or not to move it indoors or cover it as part of an “open-air museum” which would involve a monitoring system to keep the cross in the correct conditions.

“All these options we are looking at will cost an awful lot of money. We have taken our side of the preservation almost as far as we can. Now, we have to look at what is the next step.”

The group is also funding the creation of a 3D virtual tour of the graveyard and the cross by Derry-based Access Heritage which is due to go live later this year.

Mr Toland said the work of the group is an example of community-led conservation.

“This is a series of projects, one after another. We have to continue fundraising to keep all these things going.

“We have a plan and we are putting it into action and we get great support from the community.” The work is well supported by Government organisations, he added.

“I think a lot of people realise that there is something  very valuable there, that the cross is extremely valuable as a symbol of Fahan and they are prepared to go out and support it.”

The guided walk was led by John Deery of the Fahan Heritage Group who gave a talk on the history of the cross before the group made the walk to Gollan Hill. He told the group legend has it that the hill was the original choice for the location of the monastery but this was changed following a message from God in the form of two birds that joined wings to make the sign of the cross at the location where the monastery would be built. The birds feature in the artwork of the cross.The monastery was built by St Columba and St Mura was its first abbot.

The walkers took in the spectacular views of Lough from Gollan Hill before enjoying a barbecue on the grounds of Fahan rectory.

Two further guided walks will take place at the church next month as part of National Heritage Week.

The walks will take place on August 14 and 17 from 3pm to  5pm beginning at the  car park at Saint Mura's Church of Ireland. The guided walks will take in the history of the monastic settlement, the church and the graveyard.