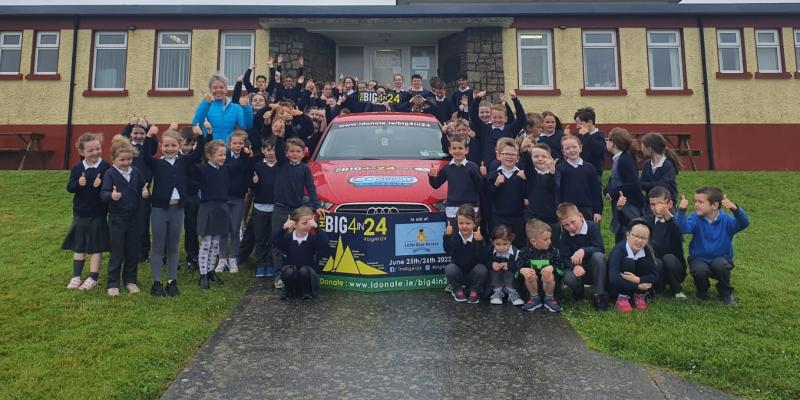 Sharon Ward, who works at Scoil Naomh Mhuire in Malin Head, with some of the school’s pupils ahead of this weekend’s Big Four in 24 challenge

A Malin Head woman is one of seven Donegal people taking part in a challenge this weekend to climb the highest mountain in each Irish province in just 24 hours to raise money for a children’s charity.
Sharon Ward is part of the group of extreme sports enthusiasts who are taking part in the challenge to raise funds for the Little Blue Heroes Foundation, a charity made up of gardaí, former members of the force and their families, friends and which helps families who have children undergoing long-term medical treatment for serious illness. Thirteen of the children who benefit from the charity live in Donegal.
The group are beginning the Big Four in 24 challenge next Saturday when they will attempt to climb Slieve Donard in Down, Lugnaquilla in Wicklow, Mweelrea in Mayo and Carrauntoohil in Kerry in 24 hours. The challenge involves 12 and half hours of driving.
Sharon, who works as a secretary at Scoil Naomh Mhuire in Malin Head, will have the support of her husband Eamonn, a garda based in Moville, who will be the group’s driver.
Sharon will be joined by Cathal McGettigan from Glen, Damian Rogers from Kerrykeel, Don Pearson from St Johnston, Fiona McGinley from Gaoth Dobhair, Paddy Robinson from Crolly, and Paddy Browne from Glen.
The group will leave Letterkenny at 11am on Saturday.
The four mountains have a combined height of more than 3,600 metres with Slieve Donard standing at 850 metres. Lugnaquilla will involve a climb of 925 metres which will be followed by the 814-metre climb to the top of Mweelrea.
The group must complete the 1,038 metres of Carrauntoohil and be back down in the car park at the foot of the mountain by 3pm on Sunday.
The seven friends have raised more than €8,000 through a series of fundraising events around the county in recent months. 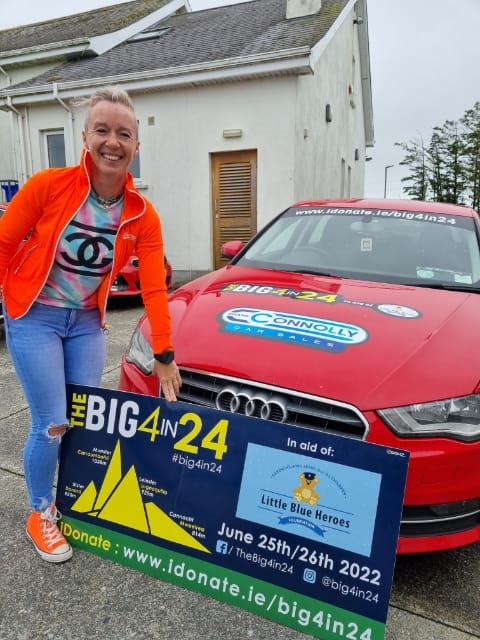 Upcoming events include a Country and Western night in the Mount Errigal Hotel in Letterkenny on July 21 and a fashion show run by McElhinney’s with some of the children who benefit from the charity modelling for the evening.
The group meet every Saturday morning and take part in a range of activities including mountain running and extreme cycling.
“We are a group with a common interest and go out every Saturday morning, usually around Errigal, and do adventure races and cycles and endurance events.”
The challenge is the latest adventure the group have embarked on.
“If it is as extreme as possible, everybody signs up and we give it a go.”
Sharon says they have been boosted by huge support from businesses in the county which includes the provision of their vehicles and the supply of all the fuel.
They will also be getting plenty of local support at each of the four climbs.

Members of the PSNI will be helping them up Donard, the Garda Siochana Hillwalking Club
will assist at Lugnaquilla, the International Policing Association hiking club will guide them up Mweelrea and a local hiking club will lead them on the climb of Carrauntoohil.
“We have people at every mountain to help us. If it is a bad misty day we don’t have time to navigate.”
She says the challenge the group is taking on is nothing compared to the challenges the children and families the charity supports face every day.
“We climb mountains every weekend - these families climb mountains every day in what they have to deal with in their lives, so they are our heroes and we are just delighted to do this on their behalf.”