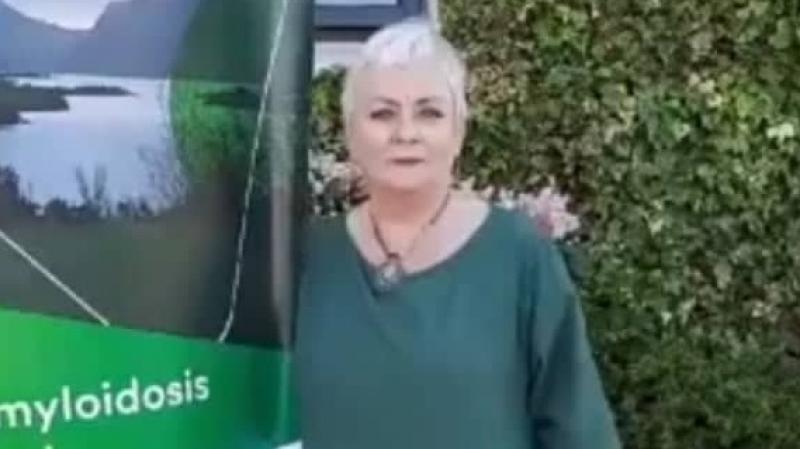 Speaking at the 'Emerging from the Shadows' conference on Amyloidosis, co-organiser, Rosaline Callaghan, whose family is from Burt in Inishowen, said the team behind it was ''absolutely thrilled we have pulled off this historic, international event in Donegal.''

Prevalent in south Inishowen, Amyloidosis is the name for the group of rare, serious conditions caused by a build-up of an abnormal protein called amyloid in organs and tissues throughout the body. It is also the condition which caused the death Derry Sinn Féin's Martin McGuinness.

The hugely successful conference, organised by the All Ireland ATTR Amyloidosis Awareness group and the Irish Heart Foundation, was held in An Chúirt Hotel in Gaoth Dobhair on Saturday.

Rosaline added: ''We are overwhelmed by the attendance of high calibre speakers who came from all over the world. It was a fabulous day to show them what Donegal can do. It is certainly a fabulous day for patients with hATTR amyloidosis.

''We are absolutely over the moon [about the roll out of Patisiran]. You heard the speakers in there today. The earlier people can get on this treatment, the less their disease is going to progress. And I have said this a million times, my testimony, I am on this treatment almost two years. I am year five into my condition. I am on my feet. I have an excellent quality of life and that is the wish that we want for every single patient in Ireland.''

Watch: Co-organiser, Rosaline Callaghan, @RosalineAuthor, at 'Emerging from the Shadows' Amyloidosis conference: "We are absolutely over the moon about the roll out of Patisiran in the Republic. The earlier people get treatment, the less the disease is going to progress." pic.twitter.com/9yJkmGN7jt

Newtowncunningham's Betty Holmes, who is chairperson of the health advocacy group Donegal Action for Cancer Care, which campaigned successfully, along with many others, for the Amyloidosis treatment, Patisiran, to be made available in the Republic of Ireland, described 'Emerging from the Shadows' as ''amazing''.

She added: ''I am so proud to have been invited and I have to give great credit to, in particular, Rosaline [Callaghan] and the whole Donegal team, who organised this. It is a fine example of what we do in Donegal. And to be part of the first conference on Amyloidosis in Ireland is excellent.

''The work that has been done by the team is in a class of its own. It is amazing, absolutely amazing. I was humbled to be invited and the information that has come out of it has just been excellent. We have looked at the treatments and had a range of speakers who are world class experts in this disease. Credit has to go to the Donegal team.''

Watch: Betty Holmes, Chair, Donegal Action for Cancer Care, at 'Emerging from the Shadows' Amyloidosis conference: "The information that has come out has been excellent. We have looked at treatments & had a range of speakers, world class experts in Amyloidosis." pic.twitter.com/OVJSspZSoI

Addressing the conference, Professor Julian Gillmore, Head of the National Amyloidosis Centre in London, outlined several new treatments for the disease. Among these was CRISPR/Cas9-base gene editing.

Speaking to Inish Times, Professor Gillmore said 'Emerging from the Shadows' had been an absolutely phenomenal day.

He added: “It was just amazing to see the enthusiasm, the organisation, and what has been achieved by this group of patients who really galvanised the All Ireland support group.

“The talks were absolutely brilliant and the interaction between the audience and the speakers was great. I thought it was an inspirational day.”

Amyloidosis 'Emerging from the Shadows

Professor Emer Joyce, Consultant Cardiologist at the Mater Hospital in Dublin said the emergence of effective treatments for Transthyretin cardiac amyloidosis (ATTR-CA) was expected to translate into improved outcomes and a promising future for amyloid patients.

In addition, Professor Sinéad Murphy, Consultant Neurologist at Tallaght Hospital in Dublin, gave a powerful presentation on ATTR Amyloidosis and the Autonomic Nervous System. She said the condition was under-recognised; lifestyle measures could help; and it deserves more research.

The President of the Amyloidosis Alliance Europe, Jean Christophe Fidalgo, said: ''Ireland was a key pillar for the international Amyloidosis community.''