In good conditions in front  of a big crowd at the Bayfield, Greencastle took an early lead after a speculative Brenan Moore effort from twenty five yards deceived Taylor Clarke in the home goal.

Moville settled and when a Jake Moran through ball looked like falling to Jack Mullan Greencastle keeper Conor Brown advanced to push the ball away. At the other end another Moore effort from distance was well saved by  Clarke. Gerry Gill then found Michael Henry but he fired narrowly wide when well placed.

Moville responded with Moran going close before they equalised on the stroke of half time after good work by Bradley Callaghan set up Moran to slot home from close range. The second half was a cagey affair. 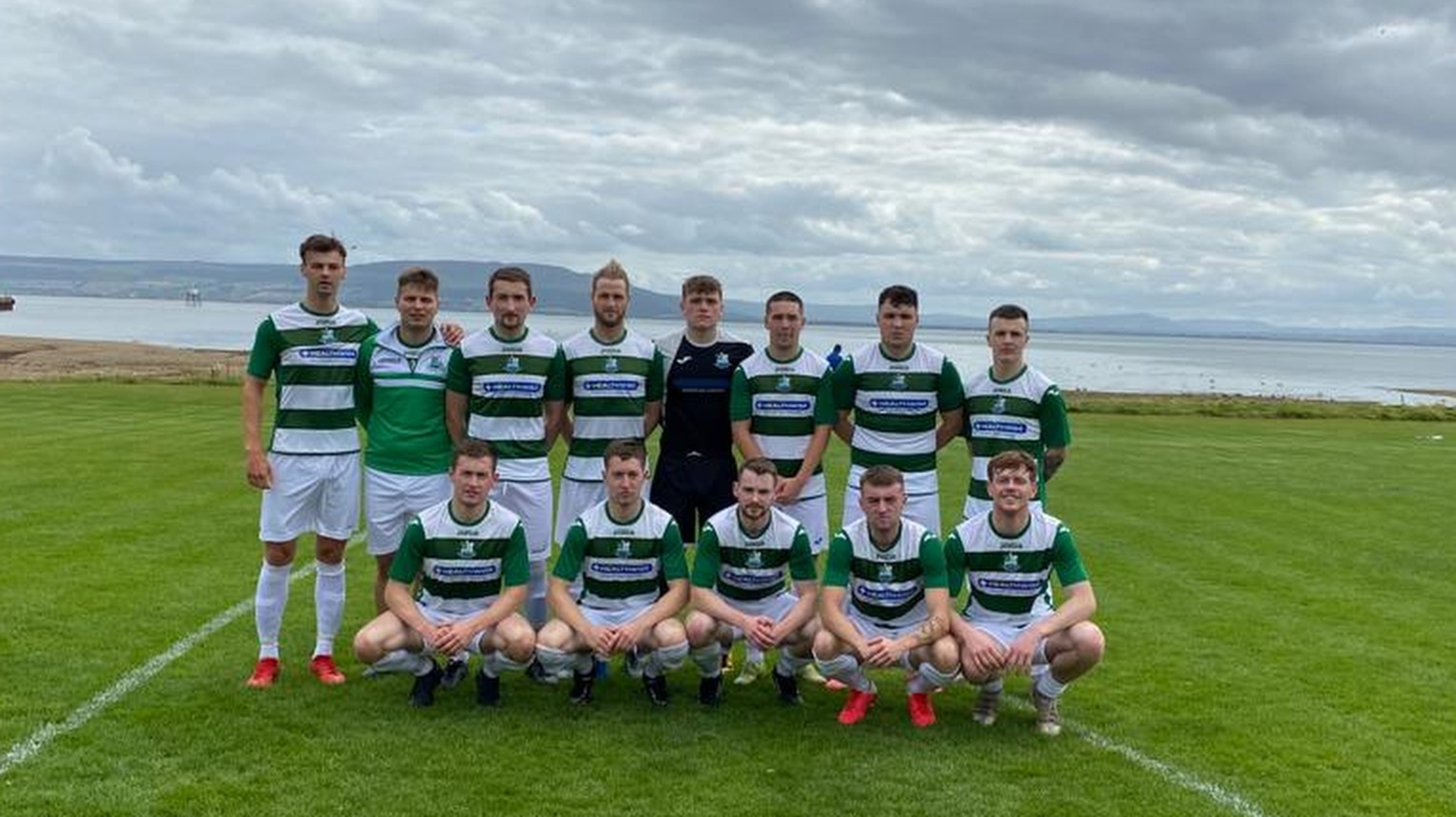 Greencastle’s Odhran Kennedy had a long range effort gathered by  Clarke. The visitors took the lead after an hour when Michael Barrs long ball was parried by Clarke allowing Moore to bundle the ball home.  Barr then had a  great chance to extend their lead but his attempted lob sailed just over the bar. Moville salvaged a point in the final minute when good link up play between Michael McNaught and Norbert Indyka ended with McNaught firing past Brown to secure a draw and leave the group wide open.

Cockhill had the first chance of the game on three minutes after a Garbhan Friel cross found Conor Allen but he headed well over the bar. Buncrana responded and in a similar chance  Kieran Mc Daid s cross found Matthew Brown but he failed to hit the target.

The home side opened the scoring on eight minutes after Paul McDaid found Christopher McKinley who laid the ball off to Sean Mullan to fire low past Eoin Colhoun.

A superb back heel midway through the half from Mullan  found McKinley but from eight yards his effort was well saved by the legs of  Colhoun. Buncrana had more possession but found clear cut chances hard to come by. 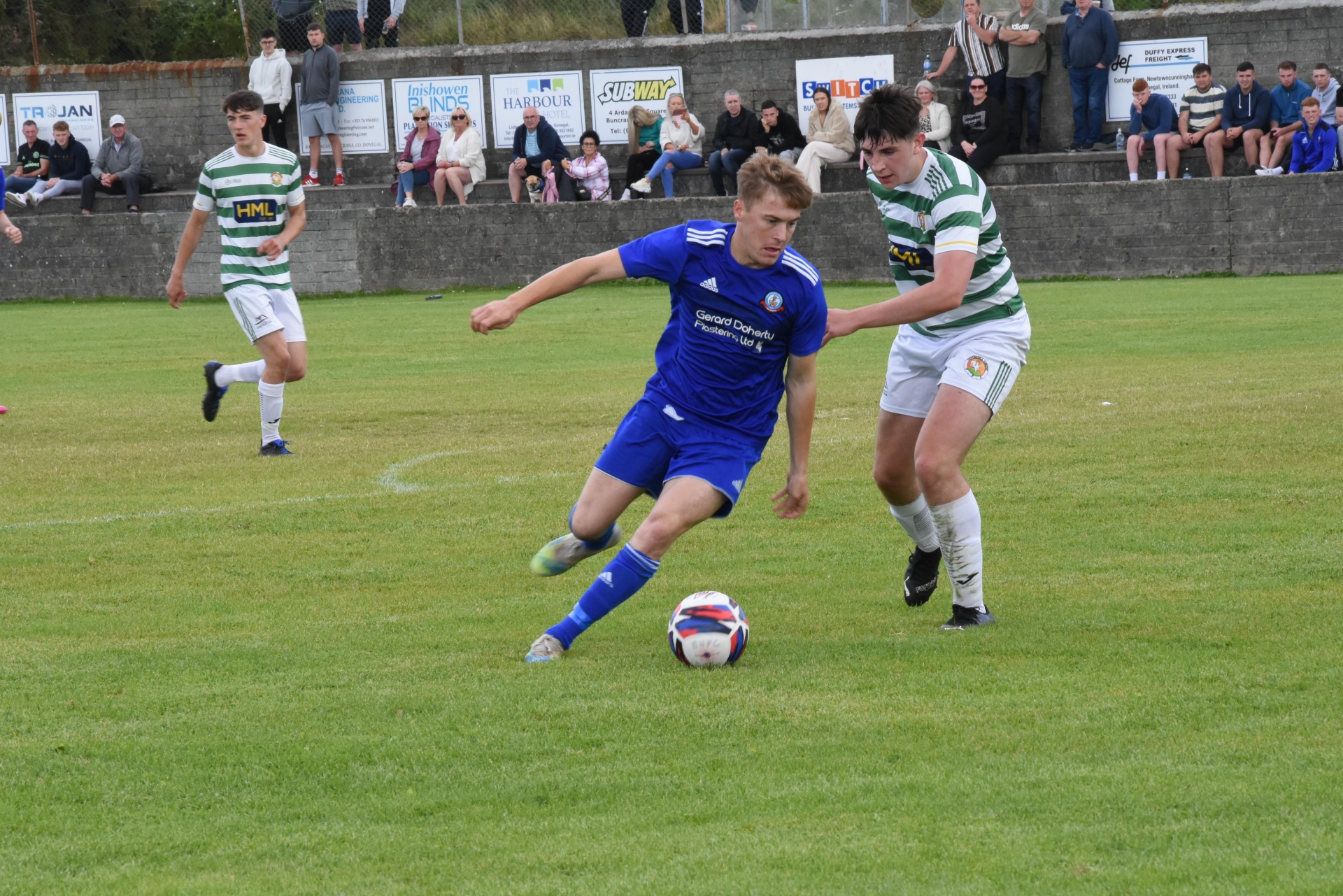 On 41 minutes Cockhill had a great chance on the break when Adam Duffy ‘s ball over the top found Conor Graham  but his shot was well saved by Rory Kelly in the home goal. The second half was a tighter affair  with defences generally on top. Cockhill had the first effort of the second period on 59 minutes when Friel cut in from the left and unleashed a powerful effort which Kelly  turned round the post at full stretch.

On 72 minutes a superb pass from Mullan released McDaid who beat two defenders but was unlucky to see his shot crash off the post. McDaid then had the final effort of the game when he saw his free kick turned round the post by Colhoun as the holders recorded  a narrow but deserved victory.

Glengad got off to a dream start in this local derby when they took the lead on eight minutes. James McKinney fed Owen Doherty whose  first time cross  reached Terence Doherty on the edge of the area and he rounded a defender and keeper  Martin McLaughlin before slotting home.

Doherty went close again then when he got on the end of a Ryan McLaughlin cross only to see his  effort shave the outside of the post. The home side increased their lead when they were awarded a penalty for a harsh handball decision and McKinney fired low to McLaughlins left  in the 20th minute.

Culdaff rallied and after a Peter Doherty free kick found Ben Curley his effort was turned round the post by Ciaran Gallagher.
From Dohertys corner the ball fell to Dillon Ruddy at the back post and he fired low to the  corner to reduce the deficit.  But before the interval Glengad restored their two goal advantage when Doherty raced onto a ball over the top, rounded two defenders before slotting low past McLaughlin.

Glengad had the first chance of the second half when Owen Doherty advanced on the right and crossed for Stephen Harley who fired over. They increased their lead on 70  minutes after good interplay between McKinney and Doherty ended with a neat lay off for John G McDermott to drill a superb shot low into the  bottom corner from twenty yards.

Culdaff battled to the end and Thomas O’Brien saw a free kick parried at full stretch by Gallagher before substitute Noel McLaughlin also had an effort saved. The final chance fell to the home side when Calvin White found Doherty  but he blazed over from close range.