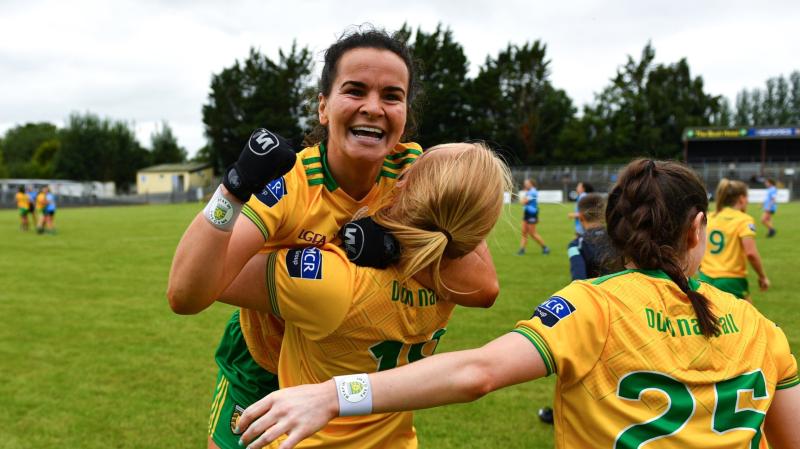 The victors played it to near perfection against a Dublin side who had won five out of the last six All-Irelands, whereas Donegal are into only their second ever All-Ireland semi-final, with their only appearance to date having been 2018.

After a solid first half where Donegal had laid out their plans to go in 0-4 to 0-1 in front, in the second they played the breaks to perfection, with Yvonne Bonner goaling before Karen Guthrie added two more. Carla Rowe managed to bundle home one for Dublin in the last minute, although it was never going to change the outcome.

Donegal scored the opening two points through Geraldine McLaughlin - the first of her five frees -  and Amy Boyle Carr and although Dublin got on the board some 10 minutes in, that was to be the last score for a quarter-hour.

Maxi Curran’s side defended in significant numbers, which made it difficult for the Leinster champions to get any attempts at Roisin McCafferty’s goal. At the other end, Donegal’s breaks carried menace, although they would have been disappointed to see the final ball let them down on occasion. That would soon change, though.

But the more the half went on, the more things began to click for Donegal, with a 15-minute scoreless spell concluded with a McLaughlin free and then another on 28 minutes. Donegal had edged into a 0-4 to 0-1 lead and it was difficult not to think of the 2011 All-Ireland semi-final when Jim McGuinness’s Donegal made Dublin think on their feet.

That said, Dublin, who only mustered five first half shots at Donegal’s post - a point, one off the upright, a wide and two short - were still only a kick of the ball behind. However, the second half was more like the 2014 All-Ireland semi-final with devastating Donegal breaks and three goals.

Dublin didn’t manage a point from play in the first period yet took less than 20 seconds to Lyndsey Davey, with the words of manager Mick Bohan still ringing in her ears.

McLaughlin, though, added two more frees, either side of another Tyrell point meant it was 0-6 to 0-3 for Donegal on 40 minutes. Their spirits were further lifted with the introduction of former captain Guthrie  - who was named to start but has been carrying a problematic ankle injury of late - was introduced.

Three minutes later, Bonner slammed past Ciara Trant for a 1-6 to 0-3 lead, with Boyle Carr bursting into space down the right and having the presence of mind to look up and lay the ball inside.

Dublin, with only 14 minutes to play, knew time was starting to wear thin and made a good response, with back-to-back points from Rowe and Jennifer Dunne for a deficit of 1-6 to 0-5.

Donegal stuck by their gameplan though, with a long Niamh Hegarty ball finding Bonner, who laid off for Guthrie to add a second goal on 49 minutes and the dream was becoming reality.

Dublin were reeling and fluffing their lines and five minutes later a boomer from Guthrie which was dropping short, fell into the  net with Tanya Kennedy’s presence perhaps distracting Trant in goal. Donegal, needing to pinch themselves, were 10 points up, 3-7 to 0-6.

Dublin kept pushing and scrambled a59th minute goal from Rowe after Caoimhe O’Connor’s first shot was blocked. Donegal are in Croke Park this day week, with Galway and All-Ireland champions Meath meeting later to decide their opponents. Today, though, was one of their most famous days.