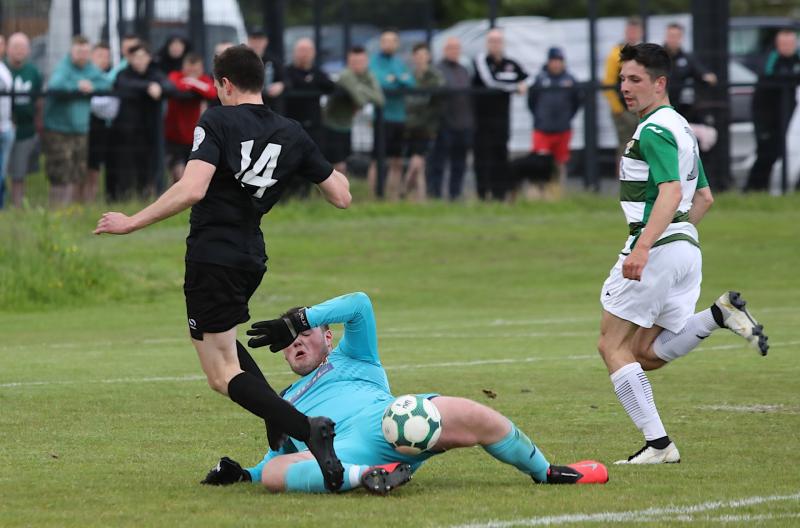 The winner of tomorrow’s semi-final between Foyle Harps and Trojans will meet Cockhill in this year’s ‘Burkey Cup’ final, after the Inishowen side got the better of Rosemount on Tuesday evening.

Having played their quarterfinal against Churchill on Sunday, Celtic had less than two days to prepare for their game with Rosemount, but that may actually have worked in their favour as they started strongly and did the damage necessary to progress in an impressive first half showing.

Rosemount meanwhile, are not used to losing, and they really had their sights set on Sunday’s final at Oakland Park, but boss Eddie Lamberton will hold his hands up on reflection and admit that his team were given few chances, and when they did get them, they simply weren’t clinical enough.

With half time approaching, two goals in three minutes took the wing completely out of Rosemount.

The brilliant Keegan Hegarty was proving a real handful on the right and he had no problem getting the space needed to cross, and this time his low cross goal was met ferociously by Callaghan who slammed the ball into the net off the underside of the crossbar to make it 1-0.

That lead was doubled within two minutes as Adam Mclaughlin played Keegan in behind, and this time the winger turned inside Dean Curran before sending a shot past Wade at his near post. All of a sudden Rosemount were in serious trouble.

'Seeing Dougie Wood was like seeing a film star!'

The Rosemount players never once gave in however, and after Dan Doran missed a simple looking header, Mo Crossan headed into the net only for an offside flag to add to Rosemount’s agony.

They very nearly made the most of it as they finally scored on 93 minutes. It was Wade who provided the assist as his punt forward was missed by Crossan but came to substitute Paddy Slevin who couldn’t miss at the bac post.

There followed a frantic 60 seconds as Rosemount tried to make the miracle happen, but there was too much to do in too little time, and Barry Maxwell’s full-time whistle confirmed a deserved win for Cockhill.