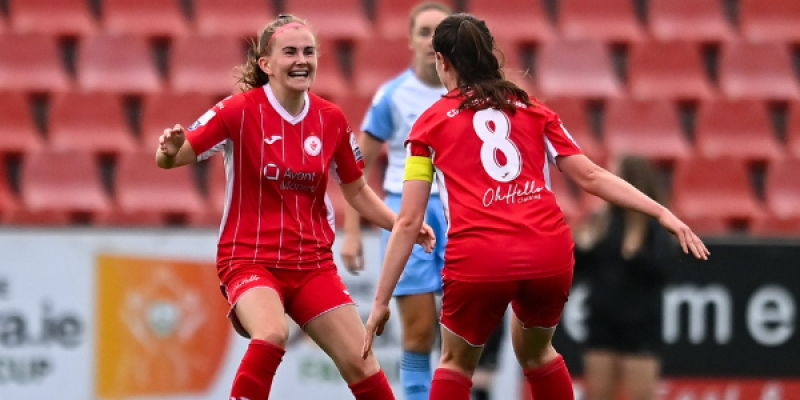 Sligo, WNL newcomers this season, came from 2-0 down to win 3-2 at The Showgrounds.

Buncrana woman Doherty was the hero of the hour, scoring twice in the second half after Gemma McGuinness’ strike just before half-time narrowed the deficit.

“It was unreal,” Doherty told the Irish Times. “I don’t know what it was on Saturday, but even when they were 2-0 up we believed that we could do it.

“It was 2-1 at half-time and we said to ourselves in the changing rooms that we could beat them. A big part of that was the crowd. There was a big crowd cheering us on.

Sligo Rovers were 2-0 down at home to champions and league leaders Shelbourne in the Women's National League before coming back to win 3-2 in dramatic style with Donegal duo Gemma McGuinness and Emma Doherty, with two, the goalscorers

“We have great character in the squad. The girls are just class. We’ve got some great players there. Really, no-one had a bad game. Everyone put in a shift for us.

“It was still almost hard to believe at the end. It was like: ‘Oh my God, did we just beat Shelbourne?’”

The game was shown live on TG4 and threatened to become an ordeal for the Bit O’Red when Pearl Slattery and Alex Kavanagh struck to give Noel King’s Shels a 2-0 advantage.

However, Sligo hit back with Greencastle native McGuinness firing home. In the second half, it was the turn of Doherty to take centre stage.

The 18-year-old latched onto a pass from Amy Boyle-Carr - the Glenties woman who only signed last week - to draw Sligo level in the 55th minute.

Just after the hour came Doherty’s big moment, stunning Shelbourne when shooting past Amanda Budden after a Lauren Boles clearance fell her way.

“That was definitely the highlight of my season so far,” Dohery said. “It was just amazing. The crowd was going mad, chanting away. It was such a buzz.”

Sligo are now looking ahead to a Women’s FAI Cup quarter-final, away to Bohemians, on Saturday-week at Dalymount Park.

A former Buncrana Hearts and Illies Celtic player, Doherty was recruited by Steve Feeney, the Sligo Rovers manager, for their maiden season in the WNL earlier this year.

Doherty hit 31 goals last season while playing for the Donegal Women’s League in the under-17 and under-19 national leagues, 28 of those goals coming for the under-17s.

After Saturday’s win, Sligo are eighth, five points off Bohs and with a game in hand. It has been an encouraging debut season in the top flight.

“We’re looking to push up and we know we can get better,” Doherty. “We can compete. We’re a new team and people probably didn’t expect us to finish anywhere but bottom, but we’ve shown we can mix it.”

There is a strong Inishowen presence in the Sligo squad with McGuinness, Paula McGrory and Alana Doherty making the journey. Until recent weeks, Erin Coyle from Moville was with them until transferring to Derry City. Boyle-Carr has strengthened the Donegal connection while Ballybofey’s Caoimhe Brennan is also on the Sligo books and Fiona Doherty, a Mayo born Garda stationed in Letterkenny, has been a prominent feature.

“The travel is actually good craic,” Doherty said. “It shortens the journey and I really look forward to going up. Sligo is a brilliant club and Steve is a great manager. I can’t wait to see what the rest of the season brings now.”