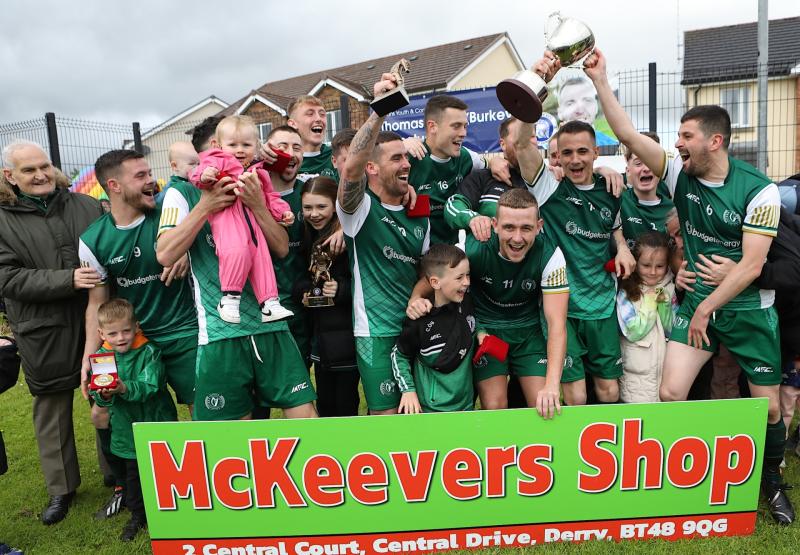 Foyle Harps are this year’s Thomas Burke Perpetual Cup winners after an emphatic victory over Cockhill Celtic at Oakland Park.

The Derry side were determined to get their hands on the trophy and they absolutely dominated Cockhill, with the ‘Burkey’ Cup won at half time with the score 5-0 in their favour.

Cockhill, who have brought a lot to this year’s tournament, defeating Churchill and Rosemount on their way to the final, were simply outclassed on the day as Harps ran riot.

The opening goal arrived after a dominant 9 minutes; it owed everything to a brilliant run through the Cockhill defence from Calvin McCallion, and although Colhoun did well to force him away from goal, there was nothing he could do as McCallion drove the ball right back across the face of goal and Ryan Doherty was there to tap in to make it 1-0.

One quickly became two as Cockhill wilted, Gareth Brown going through and placing the ball under Colhoun and into the net to put Foyle Harps in complete control of this final with just 12 minutes on the clock.

It was threatening to become a rout when Dean Brown ran through a non-existent defence to make it 3-0 on 16 minutes.

This cup final was officially done as a contest on 23 minutes as McCallion then ran at the Cockhill defence, and with no challenge incoming, tried his luck from 25 yards and found the bottom corner past a frustrated Colhoun to make it 4-0.

Harps made it 5-0 before half time with a devastating counter attack; Dean Brown racing away and beating Colhoun before squaring the ball to Ryan Doherty for a tap in for 5-0.

Cockhill refused to lie down despite the circumstances and they did their best to put some pride back on the scoreline, with Bobby Bradley pulling one back in the second half.

Harps had the final say however, with McCallion selflessly squaring the ball to Dean Brown, who found the top corner for his second goal of the game.

Trojans YCG and the Burke family; Bronagh and twins Adam and Aoife, Burkey’s mother and father Tomas and Linda, and sister Rachel, would like to thank our main sponsor McKeever’s Newsagents, Central Drive and secondary sponsor, Vogue Car Sales, for their support of this year’s competition.

Thanks also to the other businesses and individuals who have given financial support to help offset the costs associated with running the tournament; Bay Road Soccer, Mouldings Direct, Tasty Reel, James McDermott Joinery, Breslin’s Butchers, Brighton and Republic of Ireland international Shane Duffy and our own Wigan and Republic of Ireland star James McClean.

Thanks also to the people who have come along to support the competition in great numbers and to the Trojans volunteers who helped organise everything on match days.

A special thanks goes to Kitty, Claire and Noleen who catered for the hungry fans at each and every game.

Finally, a big thank you to every team who participated in this year’s ‘Burkey’ Cup. We hope to see you all again next year.