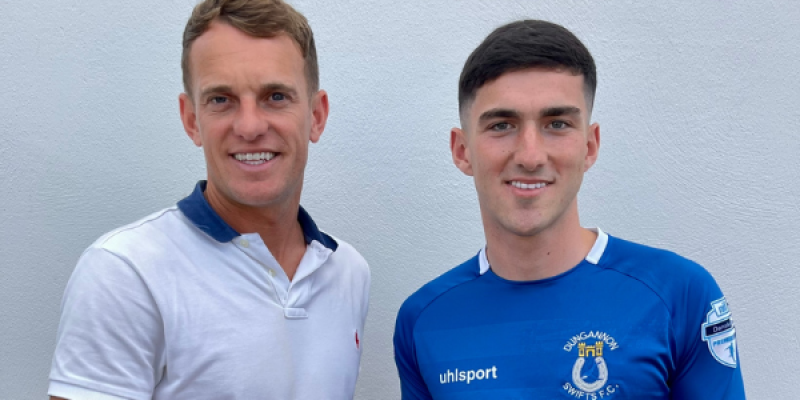 Brendan Barr has joined Dungannon Swifts in a loan move from Derry City.

The Swifts confirmed the arrival of the 21-year-old Newtowncunningham man.

Barr spent the latter part of the 2021/22 season on loan at Ballymena United.

“I want to do my best to play my part in helping the Club climb up the table and keep moving in the right direction.”

Banda, who was joint top scorer in the Championship last season, will be back at Ferney Park for the 2022/23 season

At 17, Barr swapped Finn Harps for Derry City and made some fleeting appearances in the first team before going to Ballymena to further his experience.

Dean Shiels, the Dungannon Swifts manager, is delighted to get Barr on board.

“He’s a player who had a really good season for Ballymena last year,” Shiels said.

“There was a lot of interest in him, in this window. I’m delighted he has chosen to come to us because he had a lot of options.

“I think he’s going to really benefit the team. He’s got good technique and a good edge, he’s hungry, he’s good in the tackle, he can get forward and add more goals to his game.

“He’s definitely a player who is going to improve us, he’s hungry to prove a point next year. I think he’s going to be a big player for us.”