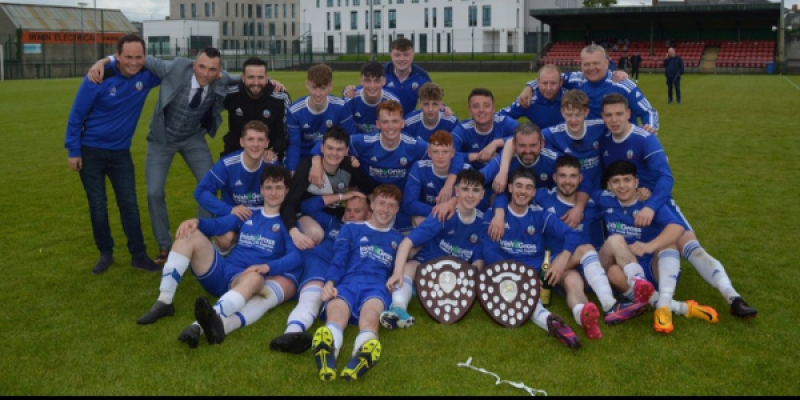 Oran McBride was the hero of the hour for Buncrana Hearts Reserves as they secured a League and Shield double.

Young goalkeeper McBride pulled off a superb last minute save to deny Dominick Doherty from the spot to win the Donegal Signs Division 2 Shield final.

Sean Tolley and Donald O’Doherty’s men were the better side over the course of the 90 minutes and in the end, they were fully deserving of their victory.

After a very quiet opening the first chance arrived on 17 minutes with veteran striker Stephen McHugh dragging a free kick wide from the edge of the area.

Buncrana replied and Graham Doherty then made a smart stop to deny McHugh from a header inside the area before Nathan McLaughlin got on the end of an excellent pass from Shane Devlin, only to fire wide at the near post.

The final chance of the half fell to the Hearts but Paul McDaid blazed well over from the edge of the box on the stroke of half time.

The second half was a much livelier affair and just three minutes in, Illies passed up a great chance when Marty Doherty found himself with only McBride to beat  but the midfielder took too long before curling just past the post.

Illies custodian Doherty then had to be alert to push a McHugh effort over but the opening goal finally arrived on 68 minutes.

McHugh floated a glorious ball to the back post from a free out on the left and there was big Paul McDaid, whose last goal on this ground came against PSG in the Foyle Cup many moons ago, to head his side into the lead.

Illies pushed hard to get themselves back into the game but it looked as though their chance had gone when Nathan McLaughlin fired wide from a Gavin Doherty cross.

There was to be one final twist however, as referee Liam Porter pointed to the spot after McLaughlin had been clipped, right on the edge of the area. Hearts players were adamant that the contact had taken place outside the box but the decision was made and up stepped player-manager, Dominick Doherty. Despite hitting the penalty well, McBride got down low to his right to make a wonderful save and seal a famous double for his side.