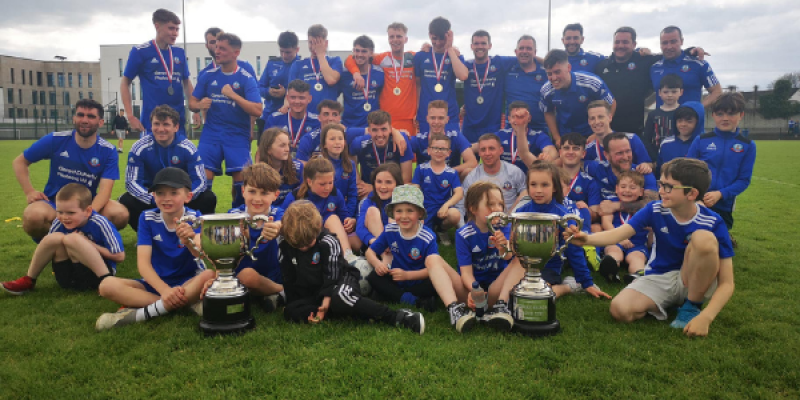 Kelly saved two Aileach penalties and the Hearts number 1 scored the final penalty of a dramatic shoot-out after a thrilling 3-3 draw as the Hearts added the silverware to the Credit Union Cup they had already secured, coming from 3-1 down in the closing chapter.

Buncrana’s win means that Ulster Junior Cup remain in Inishowen for the sixth time in the last seven seasons.

Over to the boardroom as Doherty hits dramatic winner for Kilmacrennan

Aileach will rue the fact that they led 3-1 with less than 20 minutes to go. They started well and a long Darragh McLaughlin kick released Caolan Doherty on the left who crossed for Aaron Nash but he fired over the bar from 12 yards.

Aileach took the lead five minutes later after good work on the left from Darren McMonagle saw his low cross deflect off a defender which fell nicely for brother Thomas to fire to the roof of the net from six yards.

Buncrana replied with James Adair seeing a lobbed effort drift just past the post before Kieran McDaid ,picked out by Aaron McDaid, blazed over.

The pressure told on 29 minutes when a superb pass from Michael McLaughlin found Kieran McDaid on the left and he advanced into the area before cutting back and superbly chipping the stranded McLaughlin.

Play swung from end to end and when Ethan Canning played a ball forward for Nash to chase, Kelly was alert to advance and clear.

At the other end good work from Bart Wesolowski on the left saw the ball eventually break on the edge of the area to Aaron McDaid but under pressure he fired over.

Aileach regained  the lead on the stroke of half time. The Hearts defence failed to clear the ball and when Doherty returned the ball into the area Nash was on hand to fire home.

Aileach started the second half well and Gavin Doherty slipped the ball across the edge of the area for Jordan McGeady whose low shot was well turned around the post by Kelly at full stretch.

Aileach increased their lead then in the 52nd minute. A superb ball from Darren McMonagle found Gavin Doherty inside the area and he finished superbly past Kelly.

Buncrana looked down and out at this stage but tried to respond with a Wesolowski header well off target before an Aaron McDaid effort was well held by McLaughlin.

Kelly made a superb save to parry away a Nash close range header from McMonagle ‘s cross before the keeper gathered at the second attempt a Caolan Doherty strike from the edge of the area.

Buncrana reduced the deficit on 72 minutes. The Aileach defence totally switched off, allowing Kieran McDaid to collect a throw-in inside the area on the left and cross for the unmarked Wesolowski to head home.

With Buncrana pushing forward Aileach’s Caolan Doherty intercepted a defensive pass raced forward and played a ball across to McMonagle but he fired over the bar.

With time running out Buncrana equalised with McDaid floating a free kick over McLaughlin and into the net at the back post for a superb finish.

The only clear chance in extra time came in the first half after a poor defensive clearance from Buncrana was seized on by Gavin Doherty who fed McMonagle on the right but his low effort was blocked by the legs of Kelly.

In the shoot-out, Kelly emerged the hero  when he saved two Aileach spot kicks before hammering home the winning kick after Ryan Doherty, Kieran McDaid and John Timlin had all converted.