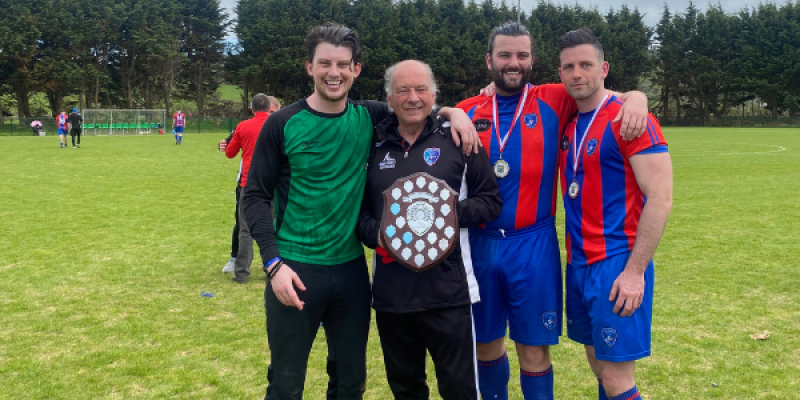 Raymond Dougal might be one of the Inishowen League’s most understated personalities, but there was no masking his pride on Sunday.

Carrowmena created a fine nugget of history in becoming the first team from the Inishowen League to win the Ulster Junior Shield.

At The Diamond Park in Ballyare, it was Carrowmena who sparkled brightest, Pauric Gillen’s 89th minute winner sealing a 2-1 win over Glencar Celtic, who had been the holders of the Shield.

“None of the players had ever played at Ballyare before. We knew it was going to be a big task. We saw Glencar before, they’re a strong side, but we did it.”

Ruairi Dougal, one of three sons-of-the-manager in the Carrowmena line-up, drew The Warren men level, 12 minutes into the second half, after Pajo Rafferty fired Glencar Celtic in front on 41 minutes.

The Carrowmena manager said: “We said that if we went a goal down, we wouldn’t concede a second.

“Maybe the goal came at a good time, just before half-time. We got them in at half-time and sorted a few wee things out.

“We came out fairly strong at the start of the second half.

“We went for the ball in behind. They wanted to come high and our thing was to catch them high. They played with three at the back but they went to a 4-4-2 in the second half. They had been getting more joy the way they were.”

“A great finish,” was how the Carrowmena boss described the match-winner as the midfielder fired home after Gerard McLaughlin’s free kick wasn’t dealt with by Glencar.

“He took the bull by the horns and just hit it.”

Another of the Dougla boys, Killian, was at centre-back with the returning Kyle proving a vital cog as the goalkeeper. After a spell as Aileach’s number 1, winning four trophies during his time at The Lakeside, Dougal returned home and had a superb game on Sunday.

“Having Kyle was massive,” his father and manager said.

“It’s a great start for any team, having a good goalkeeper. He pulled off two or three top-class saves in the final.”

By Tremore Bay now, they’ll dare to dream again. It is over a decade now since Carrowmena captured the Strand Hotel First Division and the Fr O’Gara Cup.

“After we got relegated, it went pear shaped,” Dougal conceded.

“We were playing well all year. It will give us a stepping stone to try and move up. We thought that we’d have got to the First Division this year.

“This was a team effort and we just have to try and move on, pushing hard. We’ll see where it all takes us.”