Although they fell behind to a Jack McLaughlin opener for Culdaff, goals from Ronan Hoy and Brendan Murphy sealed cup final success in Inishowen for Redcastle United 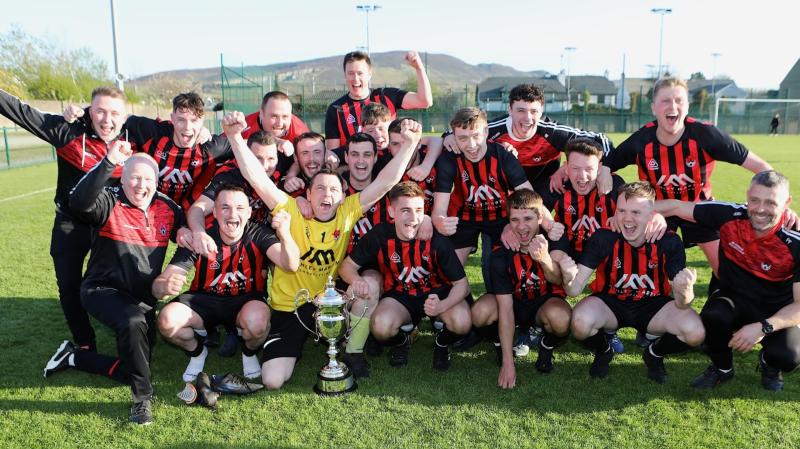 Redcastle United celebrate their victory in the . Photos Tom Heaney

In glorious sunshine before a large crowd Redcastle United came from behind to deservedly claim their first O'Gara Cup in 30 years over a Culdaff side who will be disappointed with their performance.

Culdaff took the lead on six minutes after a superb ball from Ryan Greene released Bryan McCandless on the right who advanced into the area and pulled the ball back where Jack O’Brien’s effort took a deflection forcing Michael McCole to parry. However, Jack McLaughlin was on hand to fire home the loose ball. 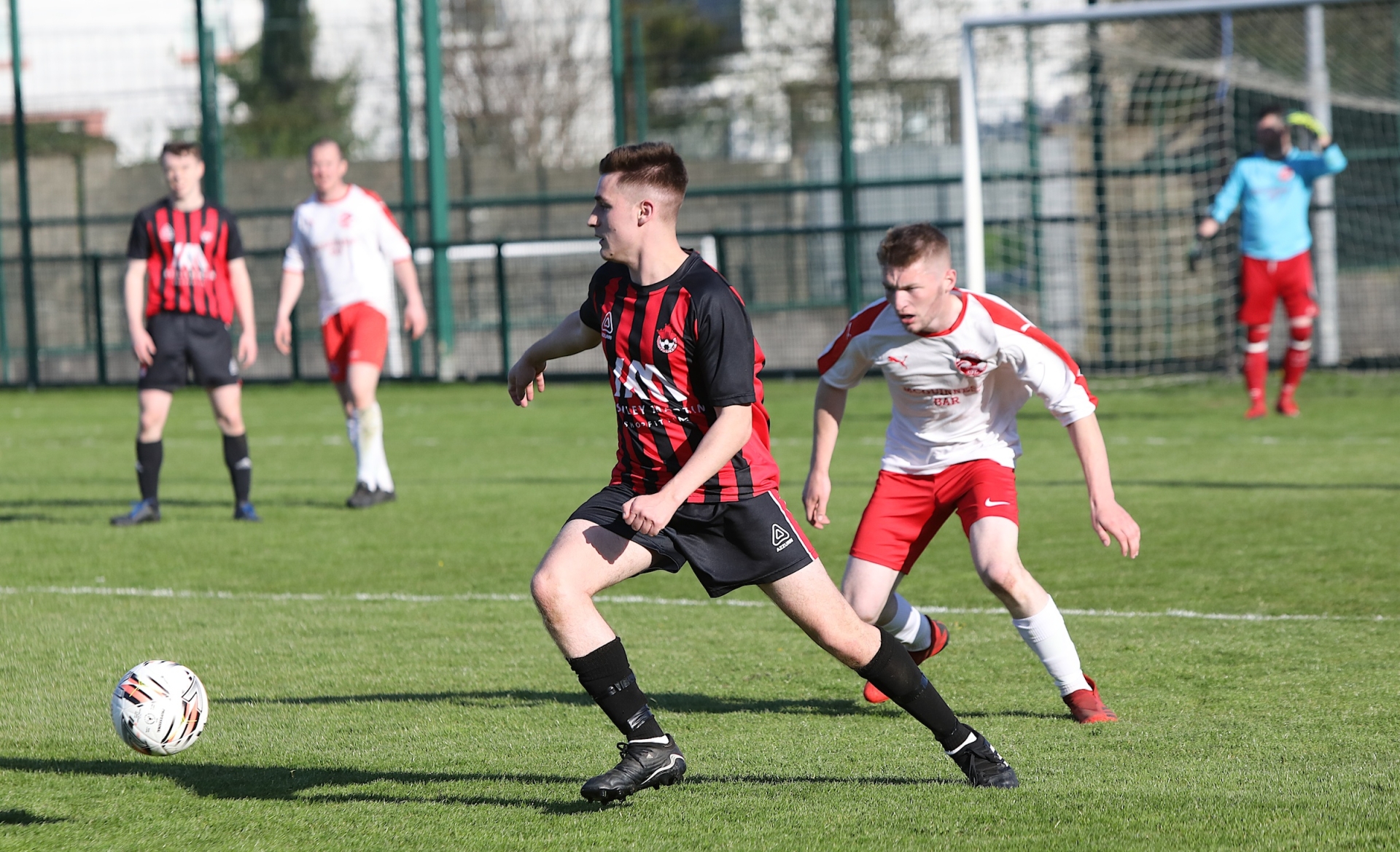 In truth that was as good as it got for the Caratra side as Redcastle were on top for most of the remainder of the game and would win thanks to goals from Ronan Hoy and Brendan Murphy.

They responded through Stephen Grant who latched onto a Shaun Curran ball over the top and hooked an effort goalwards but Martin McLaughlin gathered at the near post. Grant then broke on the right and superbly picked out Brendan Murphy 16 yards out but again McLaughlin saved.

On 15 minutes a brilliant crossfield pass from Jack Ferry  found Ronan Hoy who evaded a challenge and poked the ball past McLaughlin but was unlucky to see it crash off the base of the post.

Redcastle continued to make the running and on 20 minutes hesitancy in the Culdaff defence saw the ball fall for Gavin Grant who from point blank range headed weakly at McLaughlin. 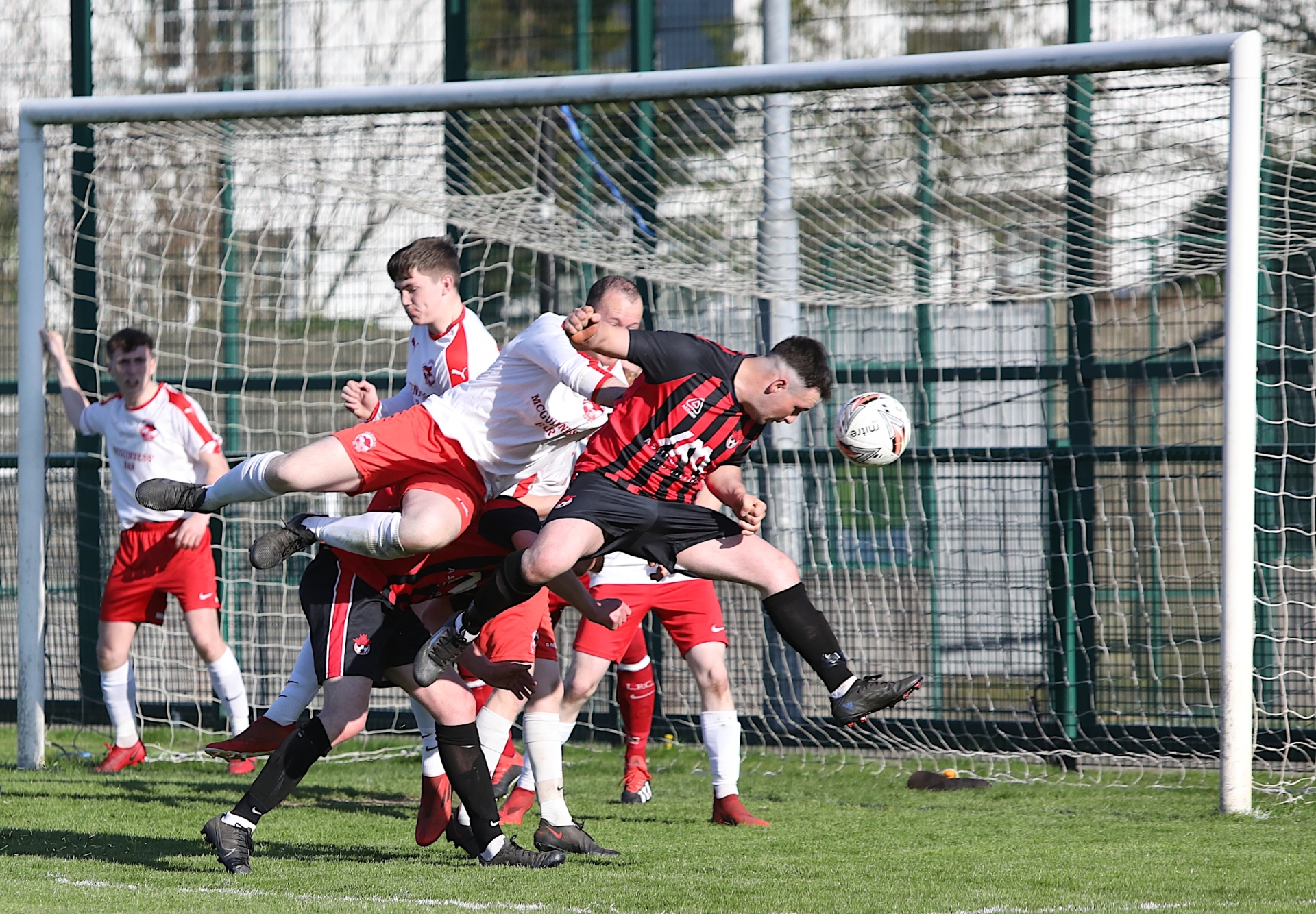 In a rare foray forward Culdaff replied with a superb pass from Jack O Brien finding McLaughlin whose early shot was parried and gathered at the second attempt by McCole before Greene headed over following a corner minutes later.

Again Redcastle upped the tempo with a Curran free tipped over by McLaughlin before  Murphy received a Gavin Grant cut back only to fire over from the edge of the area.

On the stroke of half time a mix up in the home defence saw the ball fall for Ferry who squeezed his shot past the advancing McLaughlin but Eugene McLaughlin got back to clear the ball off the line.

Redcastle dominated the second half and when Joe McCauley failed to control a  free kick over the top the chance was lost on 49 minutes. Before the hour, Hoys cross from the right deflected off a defender and McLaughlin reacted  superbly to claw the ball away before the defence cleared.

Redcastle’s equaliser had a touch of good fortune but few would argue that they didn’t  deserve it. Stephen Grant reacted quickest to a ball that came off the corner flag and his looping cross was touched onto the bar by McLaughlin before a defender headed out only for Murphy to control and float a sublime chip across McLaughlin to the top right hand corner for a brilliant finish.

Four minutes later they struck for the winner when Hoy controlled a free kick superbly before drilling low to the corner from 15 yards for another excellent finish. Culdaff finally tried to respond and McCole comfortably gathered a Greene header from a corner.

Minutes later good work by McCandless on the left saw him pick out substitute Dillon Ruddy whose goal bound volley was blocked by a defender on 83 minutes. Culdaff pushed to the end of the game but found the Redcastle defence standing solid and  on the break Hoy had one snapshot well saved by McLaughlin before seeing another from distance sail over the bar.

MAN OF THE MATCH

For Culdaff Ryan Greene played a  captain's part  while Bryan McCandless  was a threat in attack while for Redcastle Jack  Ferry and  Stephen Grant were prominent. But the award goes to Ronan Hoy who was a constant threat all day and scored the winning goal with a superb finish.