Ireland defeat Maori All Blacks ahead of New Zealand decider 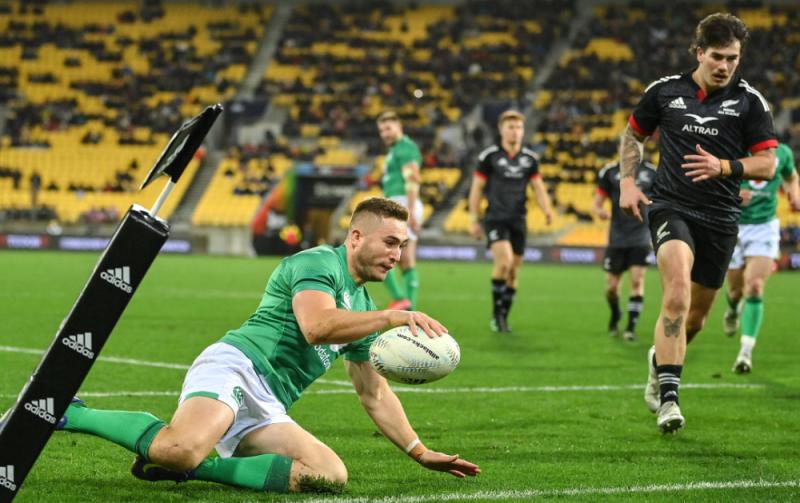 Ireland's Jordan Larmour scores his second and his side's fourth try of the match. PIC: Sportsfile

Andy Farrell’s squad will complete their Test trilogy against the All Blacks at Sky Stadium in Wellington and were given an early look at the venue on Tuesday.

With senior players watching from the stands, their understudies battled back from a sloppy start as two tries from Jordan Larmour, plus scores from Nick Timoney and Gavin Coombes, helped avenge defeat to the Maoris in the opening match of the tour.

Only a handful of the inexperienced 23 on show are likely to be involved at the weekend but the result provides further impetus for Farrell’s men following their historic first away win over the Kiwis three days ago.

Rookie fly-half Ciaran Frawley slotted 10 points on a sodden, windy evening in the capital, during which Cian Prendergast and Larmour spent time in the sin bin.

Shaun Stevenson – who claimed one of four Maori scores in the initial meeting – gave the hosts an early lead, before a second-half penalty try and a superb Ruben Love score kept them in contention, prior to Brad Weber’s late consolation.

Ireland were captained by Test veteran Keith Earls in a team showing three personnel changes to the experimental side dismantled by the Maoris in Hamilton just under a fortnight ago. 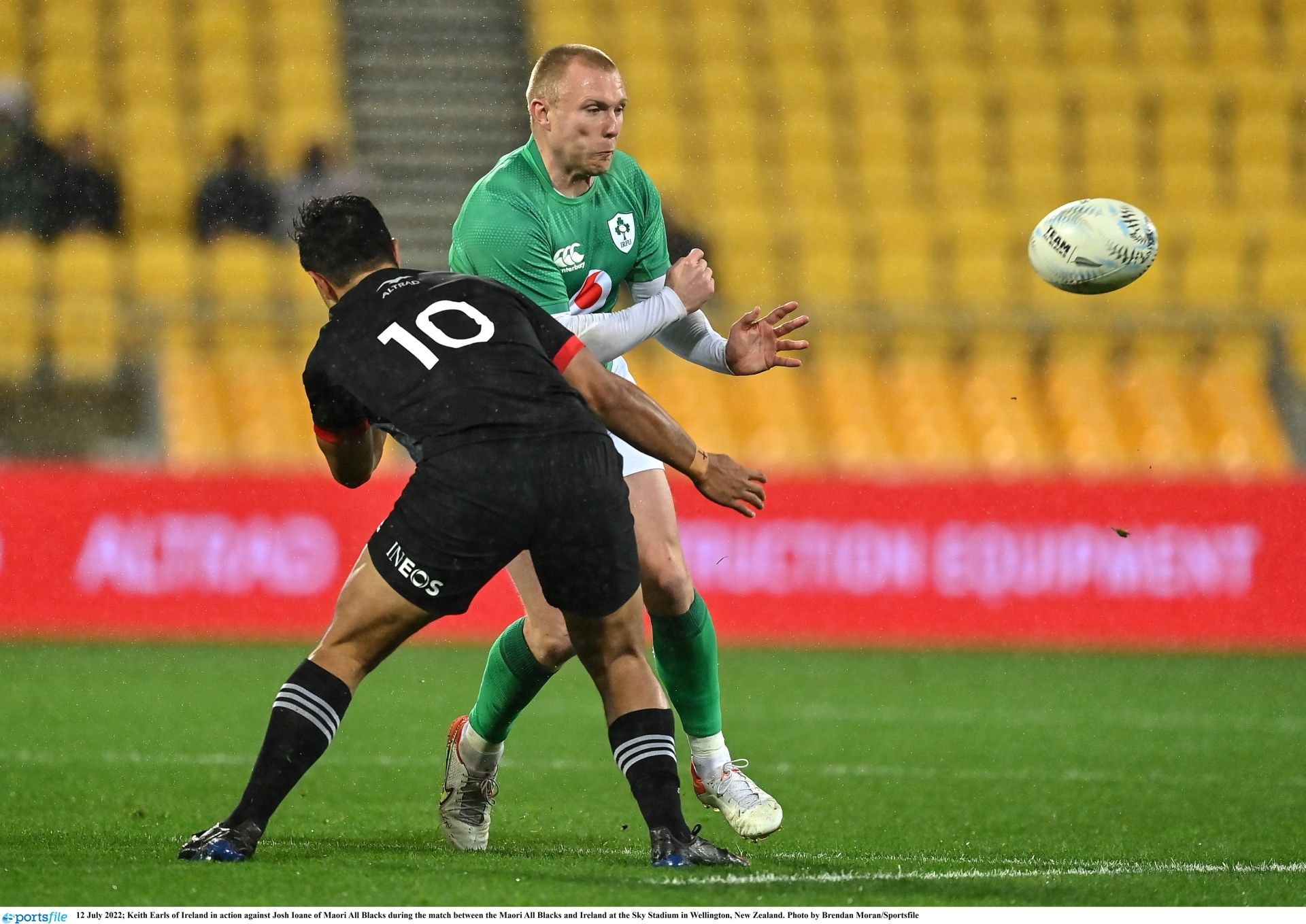 The tourists were under pressure straight from kick-off due to a series of errors, culminating in wing Stevenson diving over in the corner inside three minutes after quick ball from right to left.

Earls lined up in a re-jigged midfield alongside Stuart McCloskey and used his 97-cap experience to swiftly bring his side back into the contest with a fine piece of opportunism.

After the Maoris overthrew a pass into touch, the 34-year-old Munster player caught the opposition off guard with a quick lineout which allowed Larmour to zoom clear and touch down under the posts.

Frawley added the simple conversion and later landed a penalty to put the Irish 10-5 ahead.

Both sides were then reduced to 14 men during a scrappy six-minute spell, with Ireland flanker Cian Prendergast’s sin-binned for not retreating and Maori prop Ollie Norris soon following him after coming in at the side.

Norris’ departure came just after Coombes was deemed to have been held up amid heavy Irish pressure but there was no denying Timoney as he squirmed over following the lineout from the resultant penalty.

A further three points from Frawley stretched the lead early in the second period before momentum shifted in the Maori’s favour.

Ireland could have few complaints about the decision but perhaps felt aggrieved due to New Zealand escaping the same punishment at the weekend when prop Ofa Tu’ungafasi was only yellow carded for unlawfully stopping Garry Ringrose.

The Irish weathered the storm during Larmour’s absence and excelled at the breakdown, with Timoney particularly impressive, before reasserting their authority.

Munster back-rower Coombes made up for his first-half disappointment by bulldozing over wide on the left to put his side 25-12 in front going into the final 10 minutes. 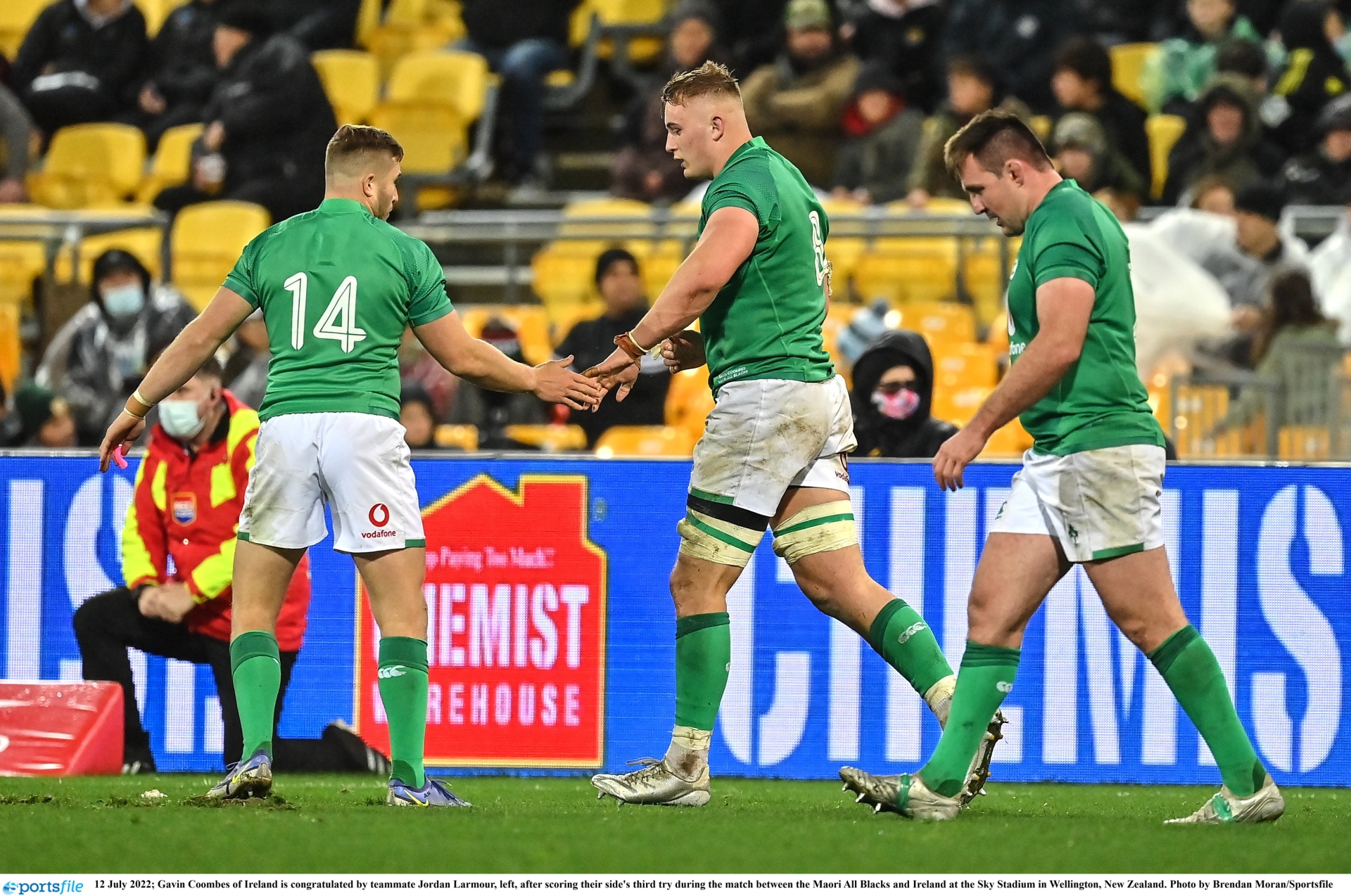 Ireland had little time to enjoy the healthy lead as Maori replacement Love ripped through their defence with a blistering run before touching down after receiving the ball back from Cullen Grace.

Josh Ioane was unable to pile further pressure on the Irish as he was again off target with a wayward conversion, before the Maoris were forced to complete the match a man down after Stevenson was sin-binned for a deliberate knock-on.

Any hopes of a fightback were extinguished two minutes from time as Larmour crossed wide on the right, before Maori replacement scrum-half Weber made the scoreline more respectable at the death.