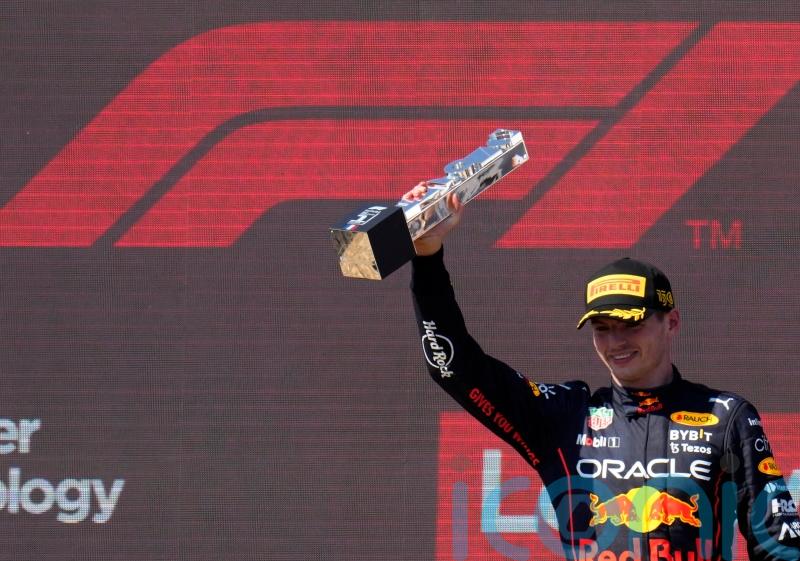 Leclerc was in charge of the race before he sensationally lost control of his Ferrari through the right-hand Turn 11 and slammed into the tyre wall.

Verstappen took advantage of Leclerc’s demise to race unchallenged to the chequered flag, and extend his lead over the Ferrari driver from 38 points to 63.

In his 300th Formula One appearance, Lewis Hamilton finished second to claim his best result of the season and his fourth podium in succession.

George Russell was third after he fought his way past Sergio Perez with three laps remaining.

Leclerc’s championship challenge appeared to be back on track after he built on his commanding win a fortnight ago in Austria with pole position here.

The Monegasque sped away from his marks to keep Verstappen at bay, and managed to retain his lead despite the Red Bull driver breathing down his neck lap-after-lap at the Circuit Paul Ricard.

Indeed, when Verstappen came in for his first stop at the end of lap 16, he had fallen two seconds back.

But just two laps later the race turned on its head when Leclerc’s scarlet machine slammed into the barrier.

Leclerc’s response over the radio was emphatic. “Nooooooooo,” he yelled before pointing the finger of blame at a sticky throttle. Was this the moment his championship challenge ended?

Nico Rosberg, on Sky commentary duty from Ibiza – the unvaccinated 2016 world champion not allowed in the paddock due to Covid rules – said Leclerc’s Ferrari was at fault.

“It would be so unusual for a world-class driver to lose the car there,” he said. “I really think there was something wrong with that Ferrari.”

But Leclerc later admitted it was driver error.

Asked if it was a mechanical failure, Leclerc replied: “No it doesn’t look like it was. It was just a mistake.”

As the crest-fallen Leclerc jumped on the back of a scooter, the safety car was deployed to remove his wounded Ferrari.

In came Hamilton, who leapfrogged Perez at the start, followed by the Mexican, and Russell, for new rubber.

Sainz stopped, too, but the Ferrari driver was released into Alex Albon’s path, and he was dealt a five-second penalty for Ferrari’s unsafe release.

The Italian team’s afternoon had fallen apart. Leclerc could be leading the championship, but for mechanical and strategical troubles, and a spin at Imola in April and his exit here.

But he will head to next weekend’s Hungarian Grand Prix – the last round before the summer break – the equivalent of two-and-a-half wins behind Verstappen with 10 rounds remaining.

Back on track, and the safety car was out for two laps. Hamilton failed to trouble Verstappen at the re-start, with the world champion almost a second clear when he crossed the start-finish line.

Hamilton qualified nine tenths behind Leclerc but he will take encouragement from keeping Perez behind as he celebrated becoming just the sixth F1 driver to rack up 300 appearances with second place.

Sainz briefly moved up to third, passing Perez, but stopped for a second change of tyres and ended fifth.

On lap 42, Russell and Perez clashed into the chicane, with the Red Bull man taking evasive action but retaining third.

“He just fully turned into me,” protested Russell. “He needs to give the place back.” The stewards looked at the incident and took no further action.

“George keep your head down,” said Mercedes team principal Toto Wolff. “You can hunt him down.”

And on lap 50, Perez was caught napping at the end of a virtual safety car period, with Russell taking his man with both Mercedes drivers on the podium for the first time this season.

Following his seventh win of his title defence, Verstappen said: “We had really good pace from the start. I put pressure on Charles but the tyres overheated and I couldn’t go for a move.

“We tried to stay calm, close and we pitted earlier. From there onwards, you never know how it is going to go. It is unlucky for Charles and I hope he is OK.”

Hamilton added: “It was a tough race. But what a great result considering how far we have been behind. Reliability is one thing my team have been amazing at. George did an amazing job, too.

“It is going to be hard to beat the Red Bulls and Ferrari in Budapest but hopefully we will take a step forward and we will be even closer.”