Darragh Kelly trains alongside Conor McGregor ahead of cage return 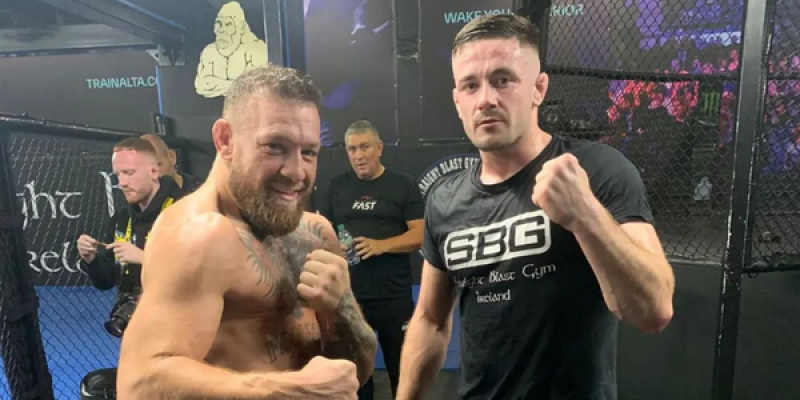 Darragh Kelly with Conor McGregor at SBG this week.

Moville mixed martial artist Darragh Kelly has been sharpening his tools alongside Conor McGregor this week.

Kelly trains out of the Straight Blast Gym (SBG), where McGregor is based and the pair are both coached by John Kavanagh.

UFC superstar McGregor returned to training at SBG this week with Kelly preparing for his September 23 showdown with Kye Stevens at the 3Arena in Dublin.

‘The Notorious’ was at cageside in February when Kelly, on his professional debut, stopped Junior Morgan in the opening round of their clash at Bellator 275.

Lightweight Kelly, who was 9-0 as an amateur, returns against the 3-1 Stevens

Bellator Dublin will be headlined by Dubliner Peter Queally (13-6-1), who will face Benson Henderson (29-11).

Kelly is likely to get some sparring rounds in with McGregor, who is building towards his own return.

Last July, McGregor suffered a broken leg in a defeat to Dustin Poirier in Last Vegas and the Dubliner appears to be eyeing up a return for early 2023.