The Welshman, a three-time and reigning British Rally champion, is firmly in the mix heading into the final day of action 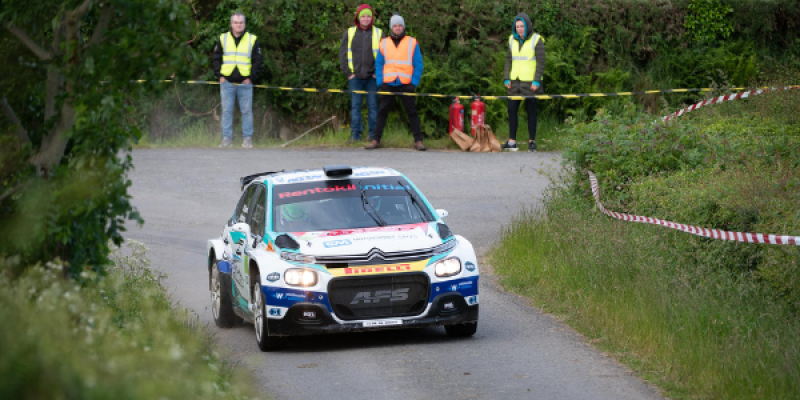 Matt Edwards believes the standard of competition in the Donegal International Rally has been top level.

Edwards, the three-time and reigning British Rally champion, sits in second place going into the third and final day of action.

The Welshman, in the Citroen C3, trails Callum Devine by 17.7 seconds.

“They’re classics. We’re up against it a bit with the local knowledge that’s here, but I’m really happy we’re near and putting pressure on Callum. It’s quite something to be a part of.

The first loop of High Glen, SS 16, has been cancelled, meaning crews will take on five, instead of six, stages today

“I haven’t been surprised by the level. I pay quite close attention to what has been going on anyway and working with Pirelli, I knew where everyone was at. This is a really high level.”

Edwards has been impressed by his first taste of Donegal and has enjoyed a ding-dong battle with Devine.

A spin on Knockalla on Saturday morning cost Edwards some time and allowed Devine open up an advantage in the VW Polo GTI R5.

Edwards said: “It has been brilliant. I’ve loved every minute, bar ten seconds of Knockalla.

“There are no tenths given. We had a mistake on the first Knockalla, which pretty much cost us the difference that we’re behind now.

“We have tried hard and we haven’t left anything behind. We gave a little bit away on one stage, but when you’re trying to work out where you lost .9 of a second over nine or ten kilometres, it shows the level that everyone is at.”

Five stages will take place on Sunday with Gartan and Atlantic Drive each done twice and one loop of High Glen in the afternoon.

Edwards will push hard in search of the vital percentages to chip off Devine’s lead.

He said: “The adrenaline and the feeling inside the car is just unreal. When you get to the end sometimes you think ‘there’s no way anyone has had any time out of me there’. Sure enough, there’s .9 gone or we’ve gained a tenth.

“We’ll try and get a few more tenths and see if we can unlock a little more.

“We need all the mileage there is. We’ll keep plugging away and keep the pressure on.”