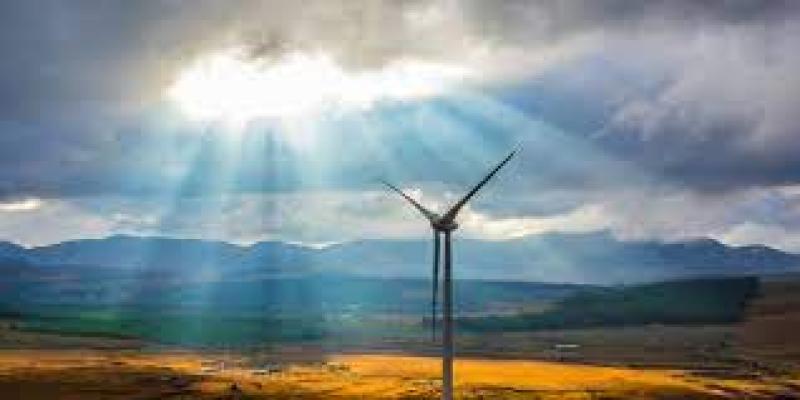 Brewing up a storm ...the wind farm saga rumbles on

Proposals to scrap parts of the wind section of the Donegal Development Plan to allow for wind farm developments in sensitive areas around the county have generated shock and anger from the public and environmental groups here.

Minister for State with responsibility for Planning and Local Government, Longford-Westmeath Fine Gael TD, Peter Burke has put Donegal Co Council on notice of his intention to revise their wind energy policy framework and to overturn a decision made by councillors only weeks ago.

The minister is proposing to scrap two sections of the wind farm policy, E-P-23 and E-P-24, which in essence remove protections from the County Donegal Development Plan 2018-20.

He is also proposing to amend map 8.2.1 and change the designation of the Lifford -Stranorlar Municipal District Areas and all areas at risk of landslides that are shown on Environmental Protection Agency (EPA) maps to be of Moderately Low and Moderately High landslide susceptibility and currently identified as Not Normally Permissible in the County Development Plan moved to Open-to-Consideration going forward.

These are the most contentious issues and ones that environmental groups around the county have been campaigning on for years. Anger was expressed at both Tuesday's Glenties Municipal District and yesterday's (Wednesday) Lifford-Stranorlar Municipal District meetings when councillors said they wanted the council to stand firm on their decisions and not be swayed. 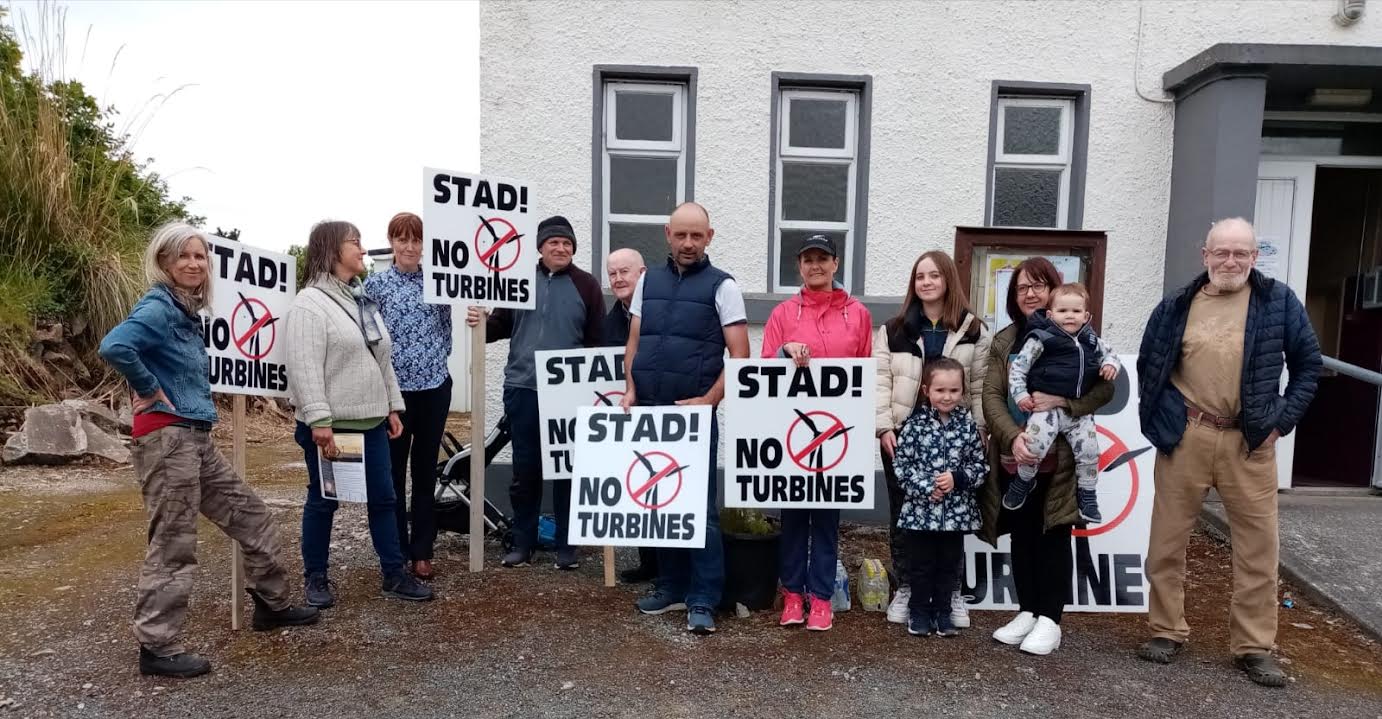 Protesters who objected to a proposed wind farm near Gweebarra recently

In a nutshell, these conditions ensured there would be no wind farm developments within the zone of influence of Glenveagh National Park; the Gweebarra River Valley; St John's Point; the five Freshwater Pearl Mussel River Catchments; Areas of Especially High Scenic Amenity and, following the environmental disaster at Meenbog outside Ballybofey, in areas susceptible to landslide.
Another ensured the development of wind farms must be ten times the tip height of dwellings.

The protective clauses or variations inserted into the wind policy section of the current and future County Development Plans were added following a period of public consultation which saw 302 submissions from people all over Donegal supporting them.

Some 19 others were received from consultants from the wind energy sector as well as a few land owners who wanted to exploit the potential to develop their holdings.

These safeguards were voted on by councillors in July and adopted on a 22-7 vote and became part of its Wind Energy Policy Framework.

Now however residents living in these areas and all the major environmental groups in the county namely Graffy Environmental Group; Gweebarra Conservation Group; Finn Valley Wind Action; Federation of Irish Salmon & Sea Trout Anglers; Glenties Windfarm Information Group; Inishowen Wind Energy Awareness; Glenties Pylons Information Group and Donegal Alternative To Pylons are angered by this latest development by the Minister to overturn the democratic wishes of the people and their councillors.

They claim that apart from the notice in last week's Donegal Democrat, the new draft directive is not published on the Government or Donegal Co Council websites providing a real sense that this is being pushed through with no regard for public opinion or the vote of the councillors in July.

A spokesperson for the groups said this week this move was an affront to local democracy and the wishes of the people and their public representatives.

"The Minister for State with responsibility for Planning and Local Government, Peter Burke, and the chief executive of the Office of the Planning Regulator, Niall Cussen, are now threatening the council with a directive to overturn the councillors' decision and open up these places to industrial wind turbines. This is like something you hear about in Putin's Russia, my way or the highway!

"We would point out that the councillors are legally correct in wanting to protect our rivers, our wild places and bogs and to enshrine that protection in the County Development Plan. We urge them to 'stick to their guns' and insist that these areas remain as stated - not suitable for industrial wind turbines.

"Donegal has done its bit as far as industrial wind is concerned. We will be paying the environmental burden of having 350 plus turbines in the county for a long time to come with pollution at Meenbog in the Finn Valley, at Maas Special Area of Conservation (SAC), at Barnesmore Gap, in Inishowen and in Tyrone Rivers.

"Indeed, the pollution legacy of industrial wind farms remains to be seen when we ask how many turbines in the county were erected using Mica/Pyrite defective concrete? Several have already fallen down and/or go on fire. The Government are going to ban turf cutting but it's okay for wind industrialists to dig up millions of tonnes of peat, dump it who knows where and fill the holes with concrete?

"The council do not appear to recognise such developments fly in the face of what other sections in the council are trying to do in attracting visitors to this place and develop the Wild Atlantic Way. 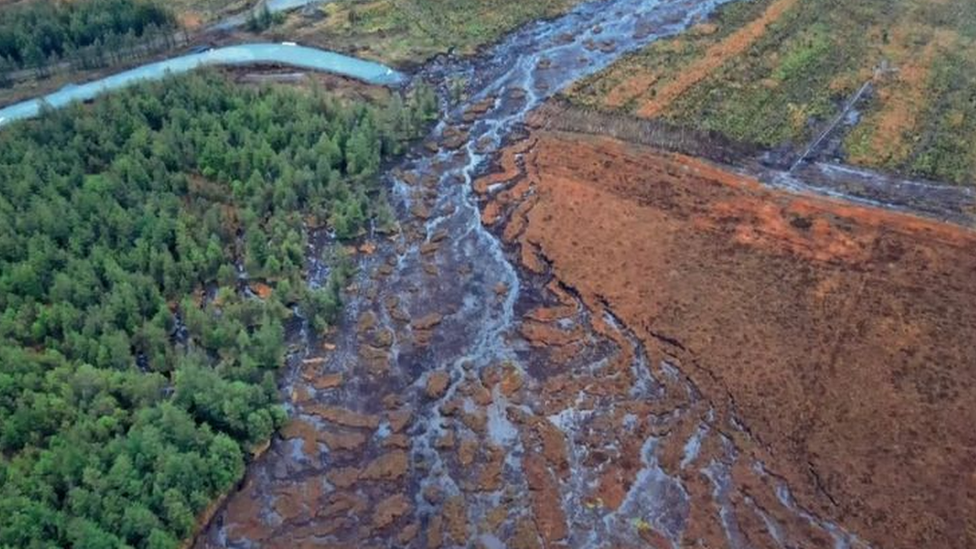 The Meenbog landslide outside Ballybofey. It has been described as an ecological disaster

"We have to save the county's landscape and all that makes Donegal unique and upon which our tourism depends. Donegal is largely a rural, small farming community and it is imperative that council planners pay heed to local opinion and not adhere to directives which will contravene the sustainable development of the county and could lead to even more pollution from wind farms and hefty legal bills for the council."

The spokesperson added that hundreds of people across Donegal took the time to comment on the council's public consultation on the matter back in May and now the minister has put his draft Direction out to public consultation too. The groups see this as a "hollow and meaningless" exercise given that the Regulator and Minister have already expressly ignored the 302 public submissions received and the councillors vote in favour of these protections.

The environmental groups and the public are calling on councillors to voice their own personal objections to Minister Burke and also direct the council executive in their reply to express the strong wishes of the public and councillors for these policies.

The public has only until Thursday next, September 22 to make known their opinion by post to: Wind Energy CDP Variation, Central Planning Unit, Donegal County Council, County House, Lifford or by e-mail to: windenergycdpvariation@ donegalcoco.ie