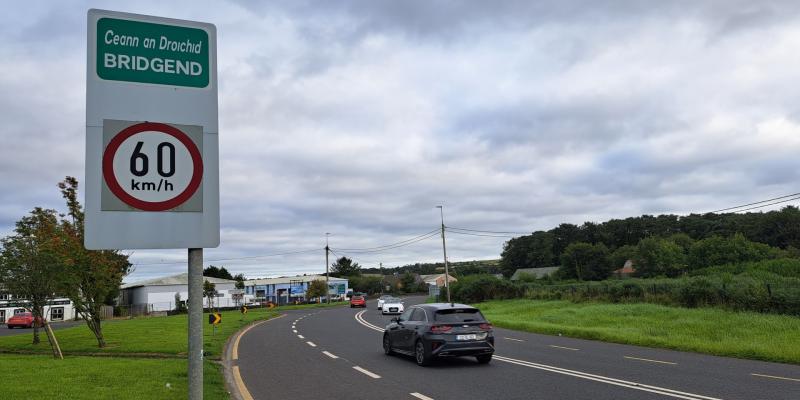 Work on what would be the biggest road project ever undertaken in Inishowen could get underway as soon as 2026.
A preferred route corridor for the N13 Bridgend to the border project is expected to be finalised early next year.
Road planners have narrowed the possible route corridors for the road through or around Bridgend from 22 to four choices.
It is expected that the new road will be a type of dual carriageway known as a 2+2. Options for the project include leaving the road through Bridgend as it is, improving the existing road or bypassing the village.
Two possible route corridors would take the bypass north of the village with one southern option.

Work on the project, which includes a €2m study, has been underway for two years.

The stretch of road from the roundabout on the Letterkenny and Buncrana side of the village to the border has a rate of collisions which is twice the national average.
The need for a new road has also been determined by developments across the border including plans for hundreds of new homes at Coshquin and the dualling of the A2 from Pennyburn to the border.

The plans for the Bridgend project have been developed with regular consultation with the Department of Infrastructure in Northern Ireland.

Meeting told installation of crossing points in village would be ‘premature’

As well as factors across the border, the need for the new road has been identified in the Bridgend local area plan which calls for an examination of ways to provide a more attractive and pedestrian-friendly village centre environment.

A second public consultation on the project is underway and is open until October 4.

Factors that will be considered in choosing the preferred route corridor include the need to attract traffic coming from Buncrana onto a bypass and away from the village.

Any new road will not impact on the route for the northwest greenway from Derry to Buncrana and will have additional active travel paths that will tie in with the greenway.

It is expected that the emerging preferred corridor will be selected early next year with a further public consultation to be held by March.

Once the preferred corridor is adopted into the county development plan, detailed design work will begin which is expected to take around 12 months.

A spokesman for Donegal County Council said that after the 18 months allowed for the project to get planning permission from An Bord Pleanála, it could have the green light by mid-2026.

Local county councillor Jack Murray said a new road must be part of the plan “to safely develop and expand Bridgend”.

“The main road through the village is one of the busiest in the county and serves as the main entry point for Donegal people travelling to Derry and onwards to Belfast,” he said.

“We cannot allow for a greatly enhanced road from Derry to bottleneck once it reaches Donegal. We need to plan for the future, ensure safety on such a busy road, and allow for the development of housing and businesses.”