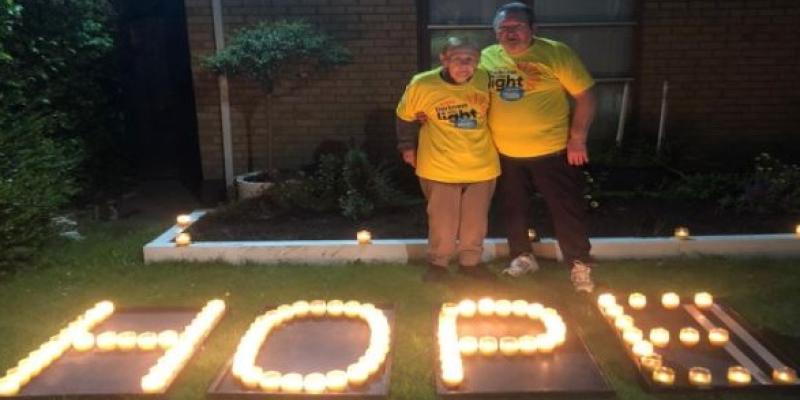 A bench in honour of the work done by a couple to raise awareness of mental health issues is to be unveiled at Malin Head this weekend.

The Bench of Hope, which is the first of its kind in the country, is being erected in honour of the work of Gertie and Johnny Fox,  founding committee members of Darkness into Light, the annual event aimed at bringing hope to people who have been impacted by suicide.

Johnny, who is 82 and a former international runner, was the first person in Ireland to do a solo run from Malin Head to Mizen Head which he did in 1979 to raise funds for two different charities.

His family have helped organise the erection of the bench to recognise the commitment of the couple to helping others.

“It’s going to be there for people to sit down on and reminisce and look after themselves and focus on themselves, “ Johnny said, ahead of his visit to Malin Head from his home in Dublin for the unveiling of the bench on Sunday.

Johnny and Gertie helped to start Darkness Into Light after losing two sons in less than two years. Robert passed away from cancer in 2006 aged 43 and Fergal was just 24 when he was lost to suicide. The couple had been attending counselling through Pieta House when they were asked by the charity’s founder Joan Freeman to help with fundraising. Johnny, who still coaches athletics at Tallaght Athletics Club, was reticent at first but was encouraged to do so by Gertie.

“For want of a better word, I was just lost,” he said.

Johnny came up with the concept of the event. The first Darkness Into Light was attended by 400 people who took part in a 5km walk to raise funds for Pieta. Now more than 200,000 people take part in the event annually.

“The whole idea of Darkness Into Light was to get as many people together so they realise they are not the only ones - they are not alone,” he said.

His son Seán, who has helped organise the erection of the bench, said Malin Head is a very special and important place due to his father’s connection with it.

“We wanted to do something in recognition of what they have done and incorporate his beliefs into that. His belief is that love and hope are the two things that people need. The bench is just somewhere for people to sit and talk and share what they have with one another.”

Seán paid tribute to Electric Ireland, Ali Farren of the Malin Head Community Association and local councillors for help in erecting the bench. He also thanked Valerie Valerie Fitzpatrick, a teacher and guidance counsellor, who wrote a poem especially for the event in Malin Head.

The unveiling of the bench will take place at Malin Head car park on Sunday, August 21 at 3.30pm.