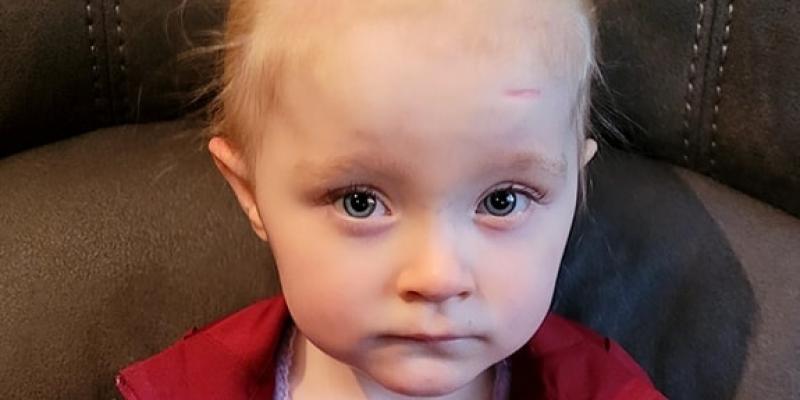 The family of a three-year-old girl from Buncrana who was diagnosed with scoliosis last year is hosting a coffee morning to raise funds for the hospital where she is receiving treatment and to create a greater awareness of the condition.

Amelia Doherty-Gill was diagnosed with the condition, which causes the spine to twist and curve to the side, after her mother Janice Doherty noticed a lump in her back.

Scoliosis usually starts in children aged 10 to 15 and Janice is trying to raise awareness that the disease can affect children much younger.

After an initial diagnosis at Letterkenny University Hospital, when she was aged two, Amelia went to a specialist at Our Lady’s Children’s Hospital, Crumlin, where the condition was identified as being mild.

But a follow-up check in March this year showed the condition had progressed and Amelia required a body cast to help shape her spine so that she does not require surgery. She is now in her second cast which will be replaced every three months.

“She is doing great although the first cast was very difficult,” Janice said.

“The first two weeks were an absolute nightmare and she had to go back to get it adjusted a couple of times but she has had a great transition to the second cast.

“We don’t treat her differently to any other child, but you always have that worry in the back of your mind that she will end up needing surgery and it is the not knowing that drives you mad. But we are hoping now that the cast delays it or prevents it.”

Janice and Amelia's father Shaun are now trying to raise awareness of the condition, especially in younger children like Amelia.

“It is much more common than people realise and I think there could be more awareness out there. I think there should be more checks for it. If I hadn't found the lump, we still would not know about it. I would ask parents to keep an eye for it, as there is an easy test, the Adams forward bend test.”

The coffee morning, which takes place in St Mary’s Hall in Buncrana on Friday, August 12 from 10am to 3pm, is raising funds for Our Lady’s Children’s Hospital, Crumlin, and Buncrana Children’s Charity.

Raffle tickets are available for sale in shops in the Buncrana area which will also be available at the coffee morning with prizes donated by local businesses. Donations can be made by Paypal to amelias.scoliosis.story@gmail.com. For more information, follow  Amelia's Scoliosis Story on Facebook.