"I am one of the lucky ones," says departing Declan Bonner When he went to sum it all up, Declan Bonner went back to January.

Bonner stepped down as Donegal manager after five years on Wednesday evening.

Having informed his players and backroom team of his decision in previous days, Bonner officially resigned when he addressed the July meeting of the Donegal county committee at the Donegal GAA Centre in Convoy.

While Bonner was believed to be mulling over his future after a chastening 3-17 to 0-16 All-Ireland qualifier defeat by Armagh last month, the reality was that the Na Rossa man had already made peace with his decision.

The delay and an ongoing silence on the matter, he explained, was that he wanted his departure to be conducted in the correct manner to club delegates.

“I felt if I was asked the question after Armagh . . . I wanted to be fair to everyone and speak at county committee,” he said. The 1992 All-Ireland winner guided Donegal to back-to-back Ulster titles in 2018 and 2019, but they were unable to repeat the trick.

“It was the inconsistency over a period of time that let us down,” Bonner said.

“When we did perform, we performed as well as any team in the top tier.”

On January 22 this year, Donegal were beat by Monaghan 1-11 to 0-13 in the Dr McKenna Cup final. Spurred by the arrival of Michael Murphy for the second half, Donegal came from nine points down to almost salvage the night at Healy Park. Almost.

Bonner said: “There was one match in particular I felt summed it up - the 2022 McKenna Cup final. We didn’t come out of the blocks in the first half. We had a superb performance in the second half and almost caught Monaghan at the end.”

Donegal bore obvious scars after losing to Cavan in the 2020 Ulster final and they were beaten by Derry in this year’s provincial decider having slipped against Tyrone in a semi-final last summer. After a complete shutdown of games due to the onset of the Covid-19 pandemic in 2020, the Championship arrived late in the year. Donegal put Tyrone and Armagh to the sword in impressive fashion, but were caught by Cavan.

On a surreal November day at the Athletic Grounds in Armagh, Cavan ended a 23-year wait for provincial glory. The 1-13 to 0-12 loss ended Donegal’s bid for the county’s first ever three-in-a-row. It was a day and a defeat that would linger in the mind for the remainder of his tenure.

“The last 18 months were difficult,” he said.

“You could go back to March 2020 and the start of the pandemic. Everyone around the globe had difficulties in their own lives, but I was still trying to manage the same group of 55-60 individuals and it was difficult.

“I felt that we managed it reasonably well. We were hot favourites going into the final against Cavan. I felt that defeat definitely had an impact on the group and it felt as if it was always there in the back of our minds. We were very close to doing three-in-a-row and we had been playing really good football. It’s hard to put the finger on it because I felt as if we were making great headway. The final defeat was a big, big disappointment.”

In September 2017, Bonner succeeded Rory Gallagher as the Donegal manager, having previously held the post from 1997-2000. Across his two tenures at the helm, Bonner managed Donegal 104 times.

The process of his return for another go effectively began by chance in 2011 when he took his son, Christian, to a training session with a South Donegal Under-15 Development squad in Ardara. Bonner agreed to give Paddy Hegarty, his former Donegal team-mate, a dig out.

Ulster successes followed at under-16, under-17, minor and under-21 levels before his ascension to the throne five years ago. In all, he took Donegal footballers to 10 titles in the last decade.

“I felt a huge honour to play for and manage Donegal at every level from under-16 to senior,” said Bonner.

“I am one of the lucky ones.

“I enjoyed every minute of it. I didn’t think that I would go back in. I was 20 years flat to the mat from I went in as a player at under-16 in the early 1980s and it has been flat to the mat for the last ten years.

“I have been back involved now for ten years and I’ve always been harping on about getting things right, the underage structures, and a number of lads I took in at under-16s are in the seniors now. The last 18 months has been brilliant with the academy under Karl (Lacey) and we’ll see the fruits of that in a couple of seasons.

“I didn’t expect to be in for five years and the pandemic was tough going. The League and Championships were changed, but that didn’t mean giving any less than 24/7. It has to be an obsession at this level. It is a hugely demanding job.” 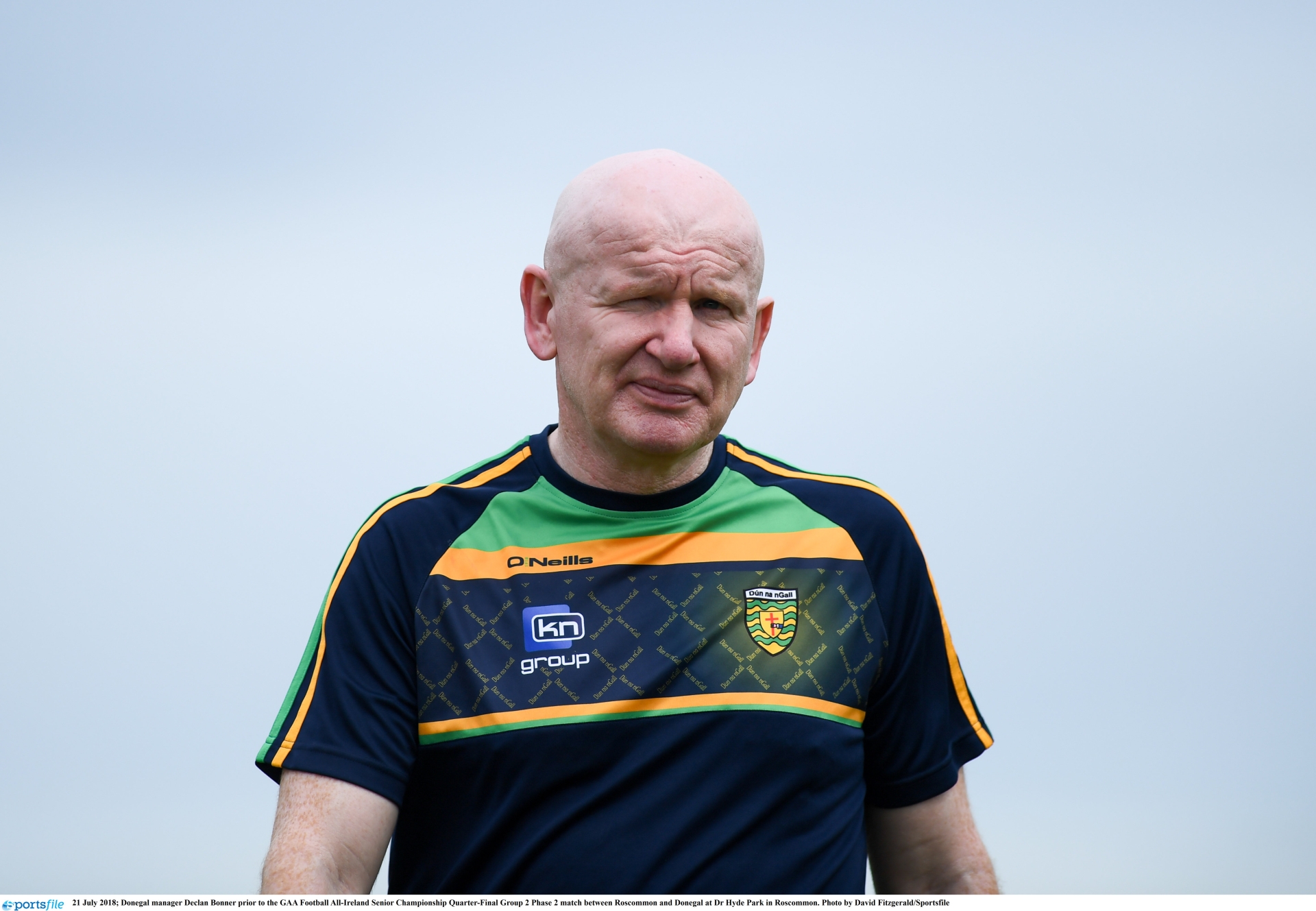 On the floor above where Bonner was conducting a press conference, delegates were putting in place the next steps. A three-person sub-committee will be tasked with liaising with prospective candidates and clubs have until August 15 to submit nominations.

Bonner saw the Anglo Celt slip from Donegal’s grasp in May when Derry came from two points down in the final ten minutes of normal time to win in extra time.

“We had a huge opportunity to wi the game and we were very disappointed to be two points up and not win the game,” Bonner conceded.

“People talked a lot about how the game went and how the game was played. Derry destroyed Tyrone and Monaghan and we knew that we had to play a certain way.

“We spoke a lot about getting the consistency right. We were two up and it was time to put the foot on their throat and go win the match. We conceded two soft scores and lost. We didn’t do what Galway did against Derry. They got ahead and really pushed on. That was disappointing because the game was there to be won.

“Against Armagh, we played 25 minutes of our best football and then made a couple of errors . . .

“There are such fine margins in top-level sport. Ulster titles aren’t easy won. We won back-to-back, only the second time in Donegal’s history, and we were very close to making history in winning a three-in-a-row.”

In the wake of a 2021 Ulster semi-final loss to Tyrone, Bonner looked in the mirror and wondered. After some soul searching, he decided to give it another go.

“I had a lot of conversations with a lot of people,” he said. “When I went back in. . . I gave it a couple of weeks just to see the lay of the land, did I have the hunger and the passion?

“The players who played under me were unbelievable. They have been absolutely outstanding ambassadors for county, club and family. They are absolutely great individuals and they wore the Donegal crest with pride.

“We got to four Ulster finals out of five and we’re still in Division 1 - the place to be for developing football and also from a revenue point of view.”

As he rose from his seat, you could almost sense a man who had just had a considerable weight removed from his shoulders.