Big Top On The Green returns to Malin 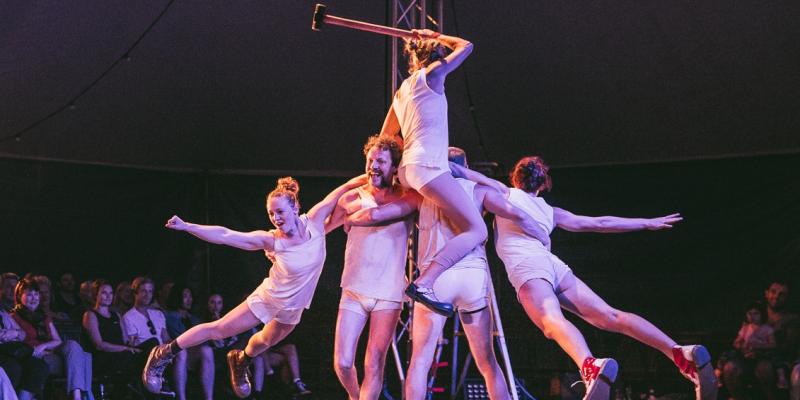 The Earagail Arts Festival is bringing the Big Top On The Green back to Malin for this year’s festival, which takes place between July 9 and 24.
The Big Top will host a series of events from July 21 to 24 with the death-defying aerialist, hardcore acrobat, and the mind-bending jugglers of Bang On presented by Tumble Circus at 3pm on July 21 and 22 and 2pm on July 23 and 24.
Superstar Circus and Circus Disco at 4pm on July 23 and 24 continue the festivities with three circus enthusiasts Jimmy, Gabbo, and AD. Superstar Circus will share the amazing tricks that has seen them charm their way into the hearts of audiences.
Super Star Circus is followed by the Circus Disco, where the stars of Super Star Circus supply the juggling balls, clubs, diablos, hula hoops, and maybe a unicycle or two and show that nobody is too old or too young to try.
Bill and Fred’s Adventures at 12pm on July 23 and 24 will bring their audience on a journey of discovery and laughter. Two professional and well-travelled adventurers, both less than useless without one another, together become master resolvers of the absurd.

Rumble in the Jumble with Lifeline Inishowen!

The duo brings a profound level of precision to their movement built through years of experience in improvisation, clowning and dance.
Baubo Theatre presents Cabinet of Curatrocities on July 23 and 24 where two hideous and lovable characters use an inventive mix of puppetry, song and dance to tell the tales of how they came by their treasures. Baubo is a new theatre collective, committed to creating high-octane, physical theatre, rooted strongly in visual design and traditions of clown and bouffon which creates street theatre shows, walkabouts and indoor performances, all with a unique blend of physicality, mischief and rich visual spectacle.
The Adventures of the Exotic Dr Proctor at 1pm on July 23 and 3pm on July 24 is the story of an intrepid explorer who travels through different worlds in his magic horsebox. Suitable for all ages, this a fun family show with a twist of magic and a hint of circus.
More information on The Earagail Arts Festival can be found at eaf.ie.