Walkers and Talkers for Breda arrive in Inver 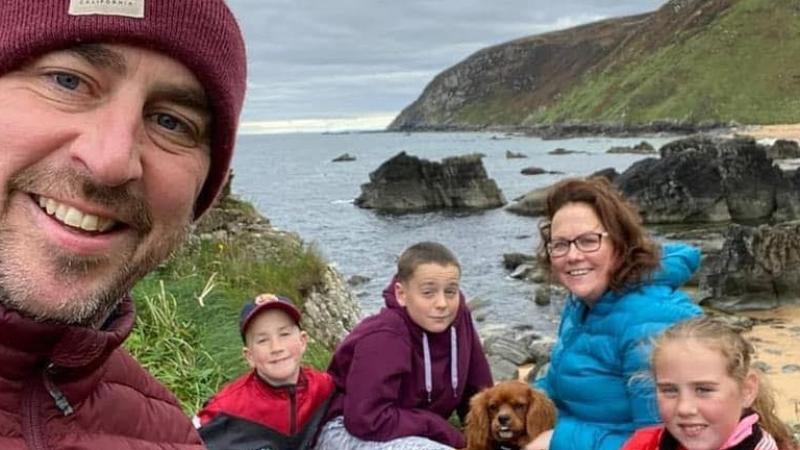 A beloved Donegal woman who passed away last August was remembered by her family and friends this weekend with a major charity event.

More than 500 people took part in 'Walk and Talk for B', a fundraiser in memory of Newtowncunningham's Breda Friel, which saw some participants walk the 80km between the Inishowen village and Breda's home place, Inver in south Donegal. The event began at 3.00am on Saturday morning and arrived in Inver on Saturday evening, to a heroes' welcome.

'Walk and Talk for B' is raising money for five organisations which deal with different aspects of cancer: Cancer Care West, Donegal Hospice, Marie Keating Foundation, Solace Donegal and the Good and New Cancer Charity.

Breda's husband, Karol said the walk had been a mixture of emotions.

"We had lashings of rain, headwinds, 80 kilometres sore legs and sore bodies, that’s life guys it’s not blue skies and sun all the time.”

He said the challenge had given him purpose in the midst of grief: “Be a role model for those around you. Set an example for those to follow. Why not, what are we here for otherwise. Don’t endure this life, embrace it. Yes, it will throw up its challenges, It has for us, but what’s the point in giving up?”

Launching the walk earlier this year Karol, and Breda's children, Daithi, Katie-May and Odhran said: “'Walk and Talk for B' was in remembrance of our beloved Breda who we lost after her near five year battle with cancer.

“Our target on June 11 is to do a 'wee walk' from our home in Newton to Breda's parent's home on the Atlantic Ocean, Inver Bay, Donegal.

“This can be done in many ways, as singles, as teams of relays, even virtually in another location for those not able to travel to amazing Donegal.

“On arrival in Inver, we hope to gather in remembrance of Breda, with no doubt, lots of tea and gin.”

Online donations to 'Walk and Talk for B' can be made here: WalkTalkforB, which will remain open until July 12.