The Buncrana woman, who is blind from birth, has been welcomed home from her trek to Everest base camp 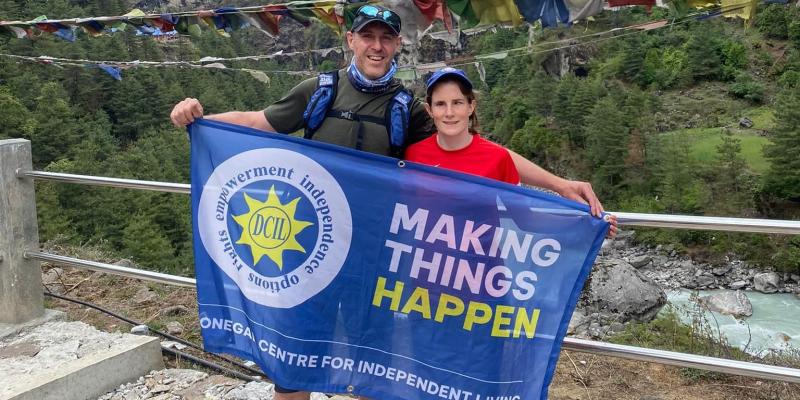 “I haven't even climbed Errigal or Muckish or anything - it’s so embarrassing,” laughed Jennifer Doherty speaking a week after her return from her trek to Everest's base camp.

The Buncrana woman, who is blind from birth, ascended to the base camp with Letterkenny mountaineer Jason Black who became the first person from the county to reach the summit of the world's highest peak in 2013.

She made the trip, which involved 330km of walking and 8,700 metres of climbing, with assistance from the Donegal Centre for Independent Living’s Opportunity Fund, which allows people with disabilities the chance to fulfil ambitions.

Jennifer was speaking at the centre in Letterkenny on Wednesday afternoon where a warm welcome home was laid on.

A keen walker who is always accompanied by her guide dog Sibyl, she said the chance to take on the epic adventure arrived out of the blue.

Jason Black approached her before Christmas with the proposal having just met her once.

Jennifer agreed to the idea almost straight away.

“I love the outdoors and nature but I never had any intentions of doing this. But it nearly felt like it was too good to be true.”

Who sent the postcard?

Jennifer's preparation included “loads of walking” with family and friends and long periods on an exercise bike. The team then did two days of walking in the Bluestacks in March.

McFeely and McCarron families all set for Relay For Life Donegal

The trek started on May 2 and they reached base camp on May 11.

“It was amazing but it was tough. Some parts of it were really, really tough - the ground was really tough. It was as much a mental challenge as a physical challenge but it was so much fun. We were with a brilliant group of people.”

The encouragement she got from Jason helped her to keep going.

“I never felt like giving up. I knew it was going to be hard from the start but that was part of the challenge.”

The trip has made her want to try to be more adventurous but she is still taking it.

“I feel like it happened to someone else and not me. It is a tremendous feeling. Every single minute of it was just brilliant.”

The fact she was blind did not matter to the team that helped her get to the base camp, she said.

Speaking at the homecoming event, Jason Black said that on leaving Letterkenny to set off on the trip, the pair made a pledge that Jennifer "would be treated as a complete human being”.

The team took the route to base camp that was used by Tenzing Norgay and Edmund Hillary. In terms of altitude, they were only 10O metres short of the summit of the mountain.

“We did it the hard way and that was the way we both wanted to do it - it was bloody hard,” he said.

Jennifer’s attitude to the challenge inspired others in the team," he said.

“The reason Jennifer was so successful in Everest base camp was that all the parts of the jigsaw came together in a perfect storm. When she was faced with what in my eyes was a really hard challenge, she rose to the occasion.

“I can truly say I was with an inspiring person when I climbed to Everest base camp - I found a new Everest in Jennifer Doherty.”