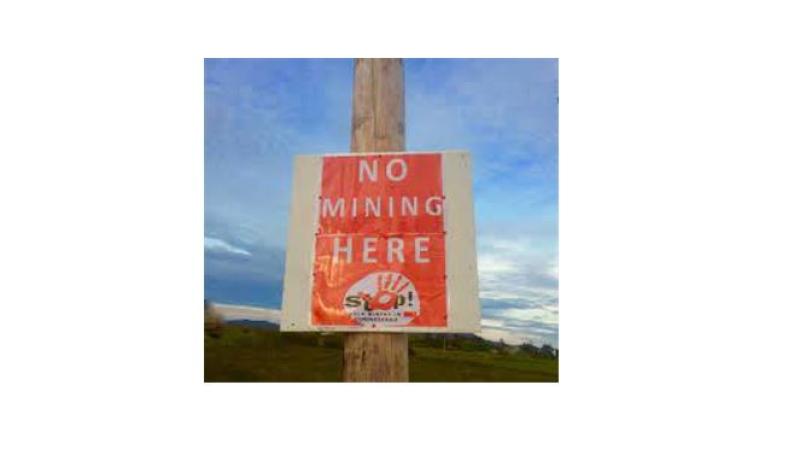 Grassroots campaign group, ‘Save Inis Eoghain from Gold Mining,’ has reacted with outrage to the decision by Minister for the Environment, Climate and Communications, Gren Party leader, Eamon Ryan, to renew the licence of Connemara Mining Co Ltd (Arkle Resources PLC) to prospect for gold and silver on Inis Eoghain.

In a statement released today, a spokesperson for the group Rose Kelly said the decision by Eamon Ryan to renew the prospecting licence of mining company Arkle Resources Ltd. flies in the face of the historic motion passed just months ago by Donegal County recognising the Rights of Nature/Rights of Community.

"It is quite simply an insult to Inis Eoghain. It shows a total disregard for the well-being of the land, water, and rich biodiversity of the region and of all who live here.

"It makes a mockery of the word ‘democracy’ given that the thousand plus objections submitted seem to count for nothing and that the local authority doesn’t have any say in the licensing process."

She added that the application for renewal and the decision to grant permission has been brought in under the cover of the pandemic and lockdown while there was no possibility of any real consultation with the people.

"When we made this point to the minister at the beginning of the process it was disregarded with a meaningless response that avoided addressing the issue.

"He seems to consider us fools here on Inis Eoghain. That his decision was communicated to us on April Fool’s Day appears to underscore this point. If this is his perception, then he is very much mistaken.

"Here on Inis Eoghain we are predominantly a network of rural and small-town communities interwoven through generations of working and living together. Connections to the land and water are still very strong.

"When the natural systems to which we belong are damaged, we feel it viscerally. Our lives and livelihoods very much depend on the well-being of Nature of which we are a part, just as the way we live our lives impacts the rest of Nature. We have everything to fight for here, and fight we will.

"We very much appreciate the many community members who have already been in contact expressing their disgust and alarm at the minister’s decision and asking how they can get involved in the campaign to protect our beautiful peninsula and our communities from the devastation that mining brings.

"We are also heartened by the many messages of solidarity and support we are receiving from the island-wide network of which we are members ‘Communities Against the Injustice of Mining’(CAIM).

"We are excited to welcome to the peninsula this summer a large group of Indigenous water protectors from the Lakota, Ojibwe and Sioux Tribes.

"Among whom will be several who were instrumental in defeating the Keystone XL Pipeline and Dakota Access Pipeline.

"They have specifically asked to come to Inis Eoghain as the final stopping point on their journey around the island of Ireland, and after they have walked the length of the Foyle from source to sea.

"We are greatly heartened that they too recognize the significance and sacredness of Inis Eoghain and the need to protect it and its communities from destructive practices such as mining.

"It is a sad irony that the Minister for the Environment, Climate and Communications and his office seem not to share this recognition. They appear to be totally disconnected from all three of the areas for which they have been given responsibility. How else can the minister’s decision be understood?

"As we find ourselves in the middle of climate and biodiversity emergencies, in what scientists are calling the era of ‘the sixth mass extinction’, their failure to act appropriately is a cause of great concern.

Ms Kelly said now is not the time to be playing the politics of ego and power.

"Now is the time to stand together to protect life. That is exactly what we intend to do on Inis Eoghain.

"We would appeal to all farmers and landowners to be alert to Arkle personnel seeking access to their land and to know that they have every right to deny entry.

"If they have concerns we would invite them to contact Save Inis Eoghain from Gold Mining.

"No prospecting, no mining, no consent," she added.