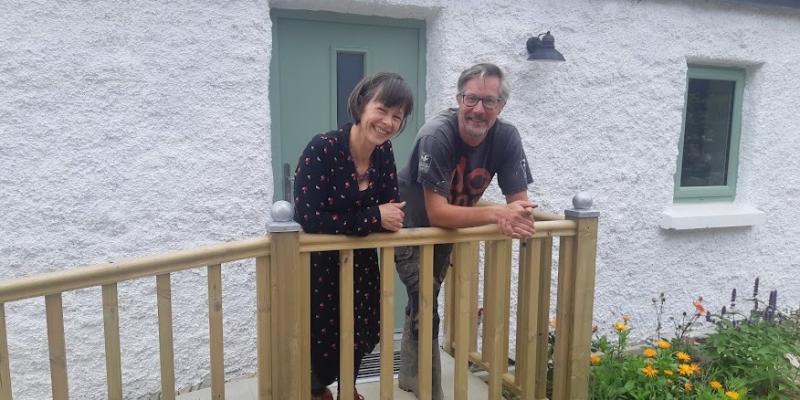 Sinéad Smyth and Andy Smith outside the restored cottage at Trenbane, Carndonagh

Sinéad Smyth’s grandfather was a stonemason in her native Carndonagh.

“He instilled a love of stone as a building material in me as a child,” she says, speaking inside the 200-year-old stone cottage on the grounds of their home at Trenbane outside Carndonagh that she and her husband Andy Smith have been lovingly restoring for more than a decade.

“It is so much more respectful to our culture to restore these cottages rather than just knock and rebuild them because a family has lived there. For me, it is like murder to knock it an old house down rather than restore it.

“It has served its time and it deserves looking after - generations have been raised in it and there are stories in the walls. The energy of the people in the locality is invested in that wee house. So why tear it down?”

The cottage, which has been restored using the same stone that the local stonemasons used two hundred years earlier, has just opened as an artist’s retreat, the only one of its kind in Donegal, she says.

Sinéad describes the concept behind Inishowen Artists Retreat and Studio as a space for creative people to come and spend time working on their own art practices, whatever art form that is.

“But it is also a space where anyone can come and spend time exploiting their own creativity under guidance.”

The guidance comes from Sinéad, who has been working in art facilitation for the best part of 30 years in Donegal and across Northern Ireland.

She is an artist who has exhibited nationally and internationally. Her career includes working with the Turner Prize in Derry when it came to the city in 2013 as part of the City of Culture year. She is a professional member of Visual Arts Ireland, which she says is unusual for a self-trained artist.

Before turning to art, she studied geography at the University of Ulster in Coleraine after being persuaded by her parents not to study art. But she found herself working in the arts in Belfast after graduating.

After a decade in Belfast, following a period working in Germany teaching English, she returned to Carndonagh and bought the house at Trenbane, which has been her home since. It was when she returned home that she began painting seriously.  “It helped keep me connected to reality.”

The pandemic came after Sinead, who has also trained as a counsellor, had been travelling across Northern Ireland as a self-employed arts facilitator. As for many people, the lockdown prompted a revaluation of her work as she was unable to travel.

“It was a recognition of myself as an older woman. I had a wee van and I was lugging boxes, wheeling my materials in and out of community centres and groups. And I just thought to myself, ‘that’s not sustainable for me’. I needed to push myself on to another level of something else.”

The cottage lies beside the house and Sinéad and Andy had begun to restore it themselves in 2010. It is on maps going back to 1830 and was the original home of the local McCauley family, who built the larger house beside it.

By the time Sinéad purchased the main house, the cottage had fallen into ruin and had been used to house livestock and turf.

“We had been slowly renovating,” says Andy, who works as a web designer from home.

“There was an idea to do something with it. But we were doing it ourselves. I was doing a lot of the work. That’s the reason Sinéad married me because I could do that sort of work, there’s no other reason,” he jokes.

“When I first moved here, it just always seemed like a great opportunity for me to use this as a base to help other people to get in touch with their own creativity,” continues Sinéad. 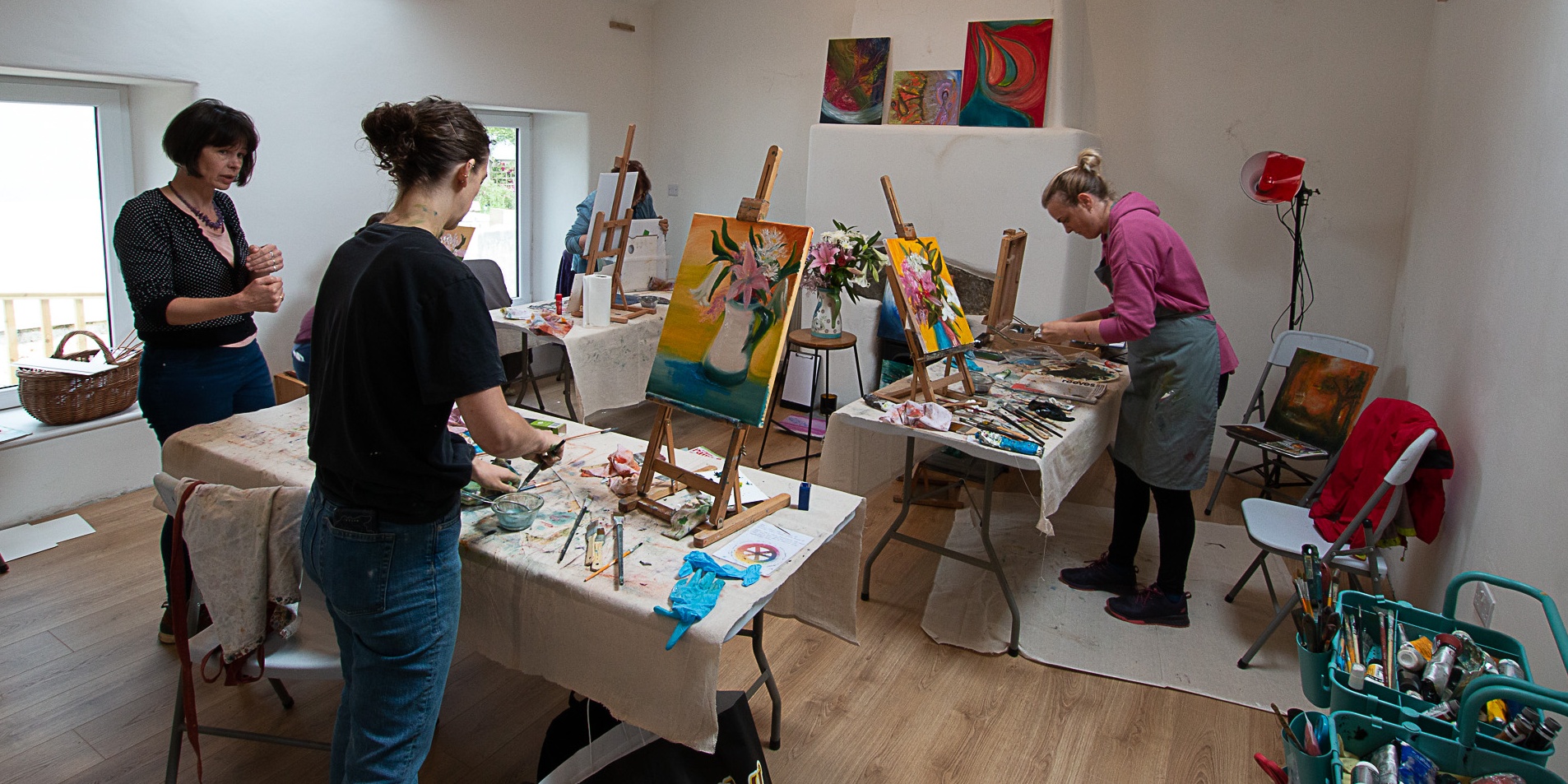 Part of the cottage has been turned into an art studio

It was a visit from a friend between the Covid-19 lockdowns in 2020 that prompted the idea of applying for funding from Leader, an EU-funded programme aimed at developing rural areas, to finally turn the cottage into what they had always dreamt it would be.

“The whole idea is about bringing people from all parts of the world and all parts of Ireland to Carndonagh and Inishowen,” Andy says.

The application for rural tourism funding was submitted in November 2020.

Andy, who is from Manchester,  trained as an aeronautical engineer and designed parachutes that landed the European Space Agency's Huygens probe on the Saturn moon Titan in 2005. But after working on components for the arms industry, he turned his energy to working in conversation.

“It didn't sit right with me, it wasn't the way I wanted my skills to be used. I really enjoyed working there but the vast majority of the parachutes ended up on the back of bombs. I left there to grow trees and that’s what brought me to Ireland,” he says

His skills as an engineer have played a key role in the restoration of the cottage, but his work had brought the cottage so far.

They received 50% funding for the project from Leader but had to “scrimp and save every penny we could” to match that funding. The grant meant they could immediately take on builders to finish the work.

The conversion of one room into an artist’s studio was completed just before the end of 2019 by Sinéad and Andy and the cottage opened last month as the facility the couple had always hoped to provide.

The cottage can also be rented for self-catering stays with a day’s art tuition with Sinéad as part of the package.

The cottage welcomed its first guests in July when folk singer Clare Sands visited along with Brian Finnegan from the traditional group Flook, who have been funded by the Arts Council to write a piece of music in each corner of Ireland.

Andy and Sinéad met while working in conservation and their interest in environmentalism is reflected in their home and the cottage. “It brings us back full circle to that,” Andy says.

They grow organic vegetables and the garden is filled with shrubs and flowers which are pollinator-friendly. 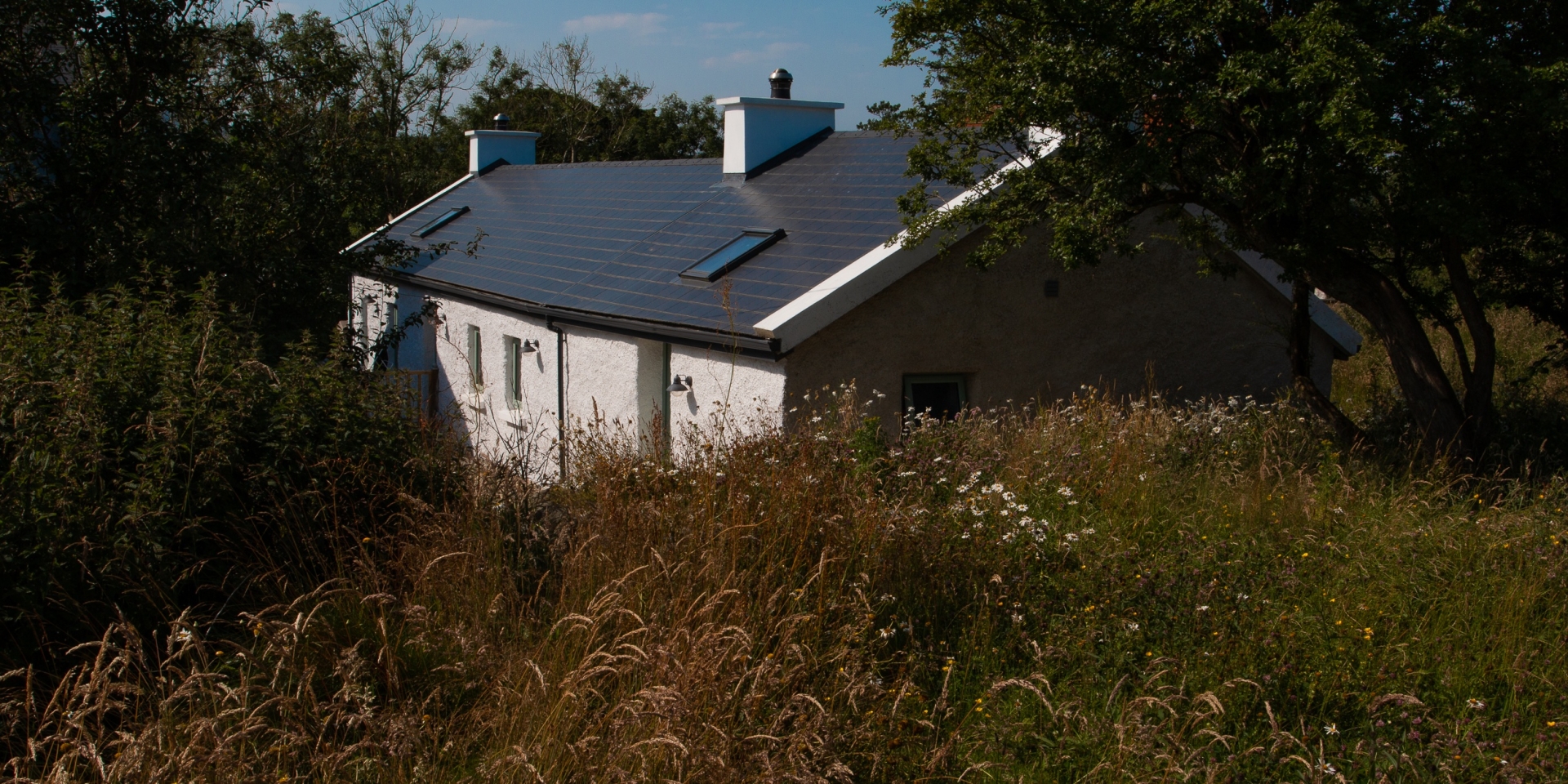 The cottage has been restored using local stone and lime instead of cement, as it is more sympathetic to stone buildings

“We have an ethos that we try to minimise the impact on the environment, “ he says. “We have used lime in the cottage which is a more sympathetic building material than cement, especially for old stone buildings. The garden is all organic and any green or kitchen waste that comes from the cottage we compost and that goes back into the garden. We have invested in a state-of-the-art sewage treatment which means the water that comes out is as clean as possible.”

A tree will also be planted on the site on behalf of each guest to help offset the impact of travelling to the cottage.

They compare the project to a small-scale Tyrone Guthrie Centre, the residency for artists in Monaghan.

“The aim of this space is to create like mini Tyrone Guthrie Centre experience, but much more intimate,” Sinéad says.

“Plus you don't need to be a professional artist to come here. You engage in a guidance process with an experienced artist and tutor who can assist you in learning about and developing your own creativity. So that makes it much more accessible for those people who feel drawn to painting or creating but feel they need a stepping stone.”