Donegal County Board Chairman Mick McGrath passed on his gratitude to those who did all they could to help Dave Gallagher from Glenfin, who is now recovering from a heart attack in Cavan Hospital 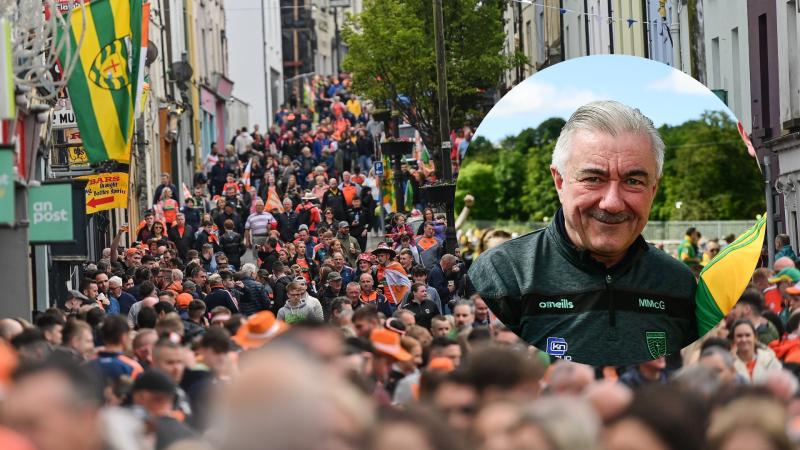 Donegal County Board chairman Mick McGrath has applauded those present at St Tiernach’s Park in Clones last Sunday week, which saved the life of a Donegal supporter after ‘a major and almost fatal medical emergency’.

Dave Gallagher, from Glenfin and living in Dublin, suffered a heart attack entering the Monaghan venue before throw-in and was saved by the reactions of the emergency services and the Ulster GAA officials who were managing the event.

“In my position as County Chairman of CLG Donegal I've had some great moments of joy and some sad moments of sorrow since I took the role of chairman,” McGrath told The Donegal Democrat.

“We all enjoy winning and we must get over the days that don't go right on the pitches of Ulster and further afield.
“Having been involved for many years in logistical planning and management of the ‘behind the scenes preparation’ of teams and events on big match days, it's only right that constructive prematch and post match moments are recorded to improve the overall management as we strive to make things run smoothly and safely.

The 5k had a bumper entry of over 500 on Tuesday


“At approximately 3:45pm on June 12, as both Armagh and Donegal teams completed their pre-match warm-up on the pitch, a lifelong Donegal supporter Dave Gallagher was about to enter the Gerry Arthurs stand in Clones with his close friends Eddie Boyle, Orla Doogan and Sinead Doogan, when he took a serious heart attack.

“This was a major and almost fatal medical emergency. The prepared personnel on standby for such incidents of event control - the stewards, gardai, doctor, cardiac ambulance crew, all combined to treat Dave and induce stability in his recovery before being moved to Cavan General hospital.

“I'm delighted to inform you all that Dave has survived his heart attack and is very much aware now of the team effort that swung into place to save his life.”

McGrath went on to pay tribute to Dave Gallagher and those who helped him in Clones. He said: “CLG Dun na nGall value the life long support that Dave Gallagher and his friends has given their county and we thank sincerely the members of the Ulster GAA Council, Monaghan County Board, the members of the Garda and Reserve Garda who performed CPR, under the management of Inspector Adrian Durkan, the ambulance crew who assisted his immediate assistance and the doctors and staff at Cavan General Hospital where Dave is still a patient.

“He is due for release this week and shall be monitored by a hospital closer to his home in Dublin, in his overall recovery. I've spoken to Dave and he sends his sincere thanks to everyone involved. I suggest that sometime in the autumn we can come together and recognise the true thanks of Dave in a more relaxed atmosphere than his last visit to Clones.

“It's right that we constructively look at managing our events correctly, and it's also right that we say ‘well done’ when the GAA gets things right.”
ADVERTISEMENT - CONTINUE READING BELOW