Inish Cycling Club do Malin to Mizen in under 24 hours 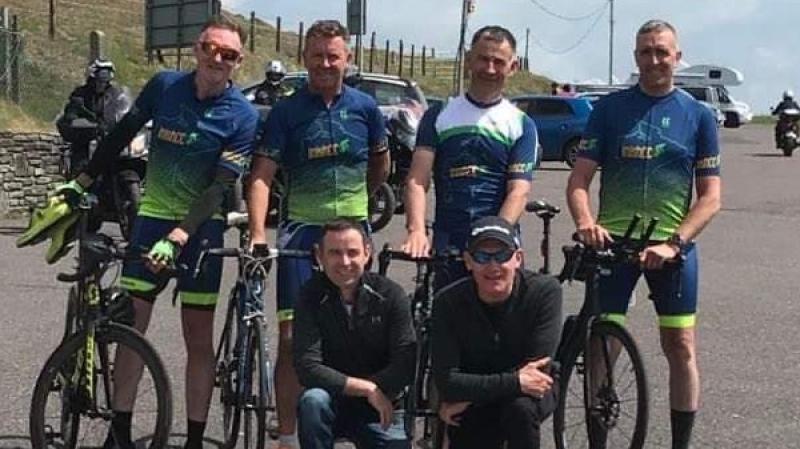 The are a hardy bunch in the Inish Cycling Club, where four cyclists have just completed the Malin to Mizen challenge in under 24 hours.

Speaking to Inish Times / Inish Live, one of the four, James McCauley, was also quick to acknowledge the crucial role played by crew members, Bernard Farren and Declan McNicholl, in terms of pit stops.

James, joined by fellow cyclists, Thomas Farren, Nigel Davenport and Mark Steele, set off from Malin Head at noon on Saturday, May 28. They arrived in Mizen Head at 11.45am the next day having cycled a gruelling 360 miles.

He revealed: “The preparation started back in January because this was not an undertaking we could embark on lightly. It was a big challenge. We went out training most Saturdays. We started to ramp up the miles to five or six hour spins and then, closer to the time, we started to get back-to-back training spins, cycling on a Sunday as well.”

Inish Cycling Club is based in the Moville, Redcastle, Greencastle area and James said when you have been cycling for a long time, cycling the length of Ireland is one of the “bucket list” things you want to do.

He added: “We are all cycling quite a while now and we are not getting any younger so it was a matter of getting out there and getting it done.

“The whole club had a meeting in January, about the idea of the whole club cycling from Mizen to Malin. In fact, we are actually doing that in two week's time, 16 of us, over four days. We have the accommodation and everything all organised and, at this stage, the countdown is on.

“In the meantime, four of us decided we would do a 'recce' run to find out what it was going to be like. We decided to do it in one day.

“We weren't even sure if we would be able to do it in one day but we were reassured by other people who have done it that we could.

“We did it all together on the road at the one time. Right up to two weeks before we were due to leave, we were planning to cycle from Mizen to Malin. But, two days before we left, we flipped it. We were weather watching the whole time and we had two weekends of a window to pick, the last weekend in May or the first weekend in June.

“Weather is very important. You are not going to cycle the whole way into a headwind. So, we weather watched and with two days to go we changed it and went North to South because there was a northerly wind for a week.”

The Inish cyclists completed the challenge in 23 hours and 45 minutes.

James said: “There would have been about two and a half hours down time. On the way down we stopped when we felt we needed a rest and a bite to eat. We would have pulled into car parks. The crew in the van would have had all our food and flasks of tea ready.

“We tried to make the stops as quick an as efficient as possible, with as little down time as we could. It was a mixture of pasta and chicken, good carb and protein foods.

“On the bikes we would each have had our own food. I know for myself I always think fig rolls are a great thing to reach in for. They are one of those foods that does not melt in your pocket because you ave to eat. It is so important.”

James explained that the cycle was a fundraiser for Breast Cancer Ireland.

“I lost my wife, Ann, 15 years ago to cancer, I always felt I should have organised a fundraiser at the time,” said James. “I would have made a contribution to Breast Cancer Ireland every year but, when we had the meeting to finalise the Malin to Mizen cycle, I said to the boys, people were stopping me in the street and wishing us well and asking if we were doing it for charity.

“I volunteered to set up the link to Breast Cancer Ireland and it means, if people wanted to make donations they could or if they wanted to do an act of kindness. It really took off. We are up at €9,000 now and there is still more money to come in,” said James.

Donations to Breast Cancer Ireland in support of the lads can be made HERE: