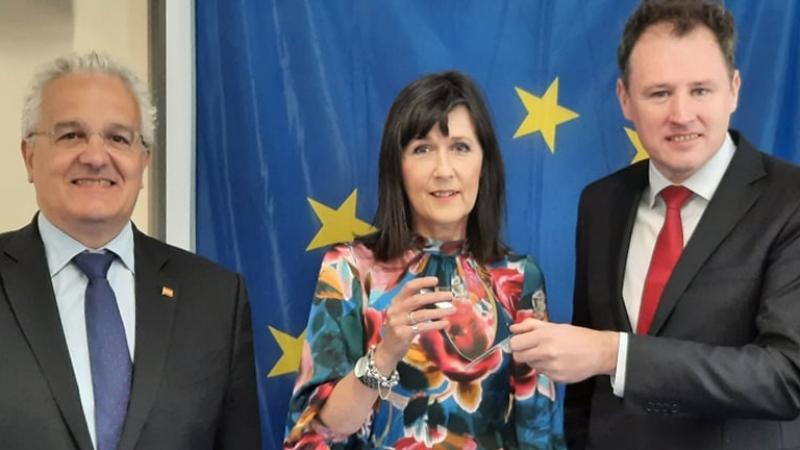 In the absence of a collective noun for diplomats, Inishowen hosted what was described as a Ferrero Rocher of Ambassadors on Monday.

His Excellency Mr Ildefonso Castro, Ambassador of the Kingdom of Spain and his wife, Mrs Esperanza Cancio de Castro, celebrated Europe Day and the 50th Anniversary of Ireland's accession to the European Union (EU) in the peninsula, as guests of Minister Charlie McConalogue.

Ambassador Castro's day began with a visit to Inch levels in Burt, which is part of a partnership project across the EU, including Spain. 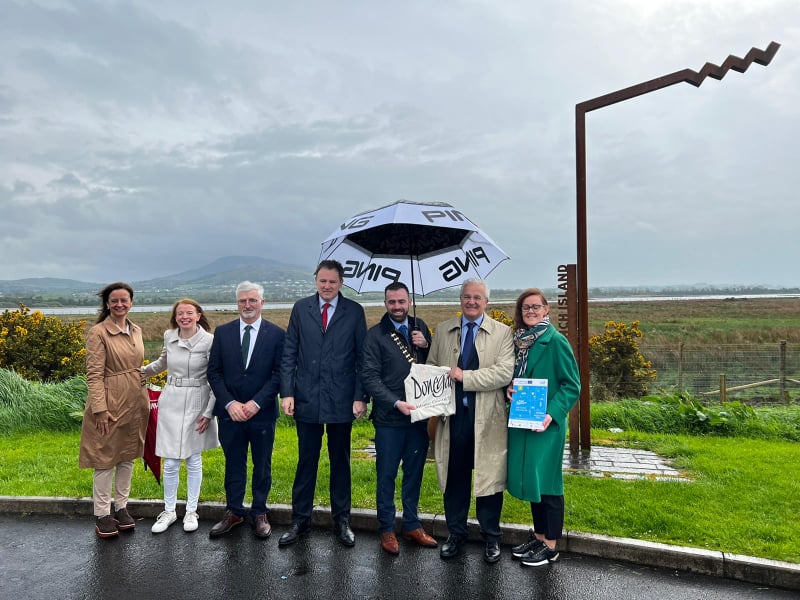 His Excellency Mr Ildefonso Castro, Ambassador of the Kingdom of Spain and his wife, Mrs Esperanza Cancio de Castro at Inch Levels

He also visited the Inishowen Maritime Museum in Greencastle, where he viewed artefacts from the Spanish Armada. He later met Cllr Gerry Crawford to celebrate the twinning of Lifford Stranorlar Municipal District with the resting place of Red Hugh, Valladolid.

He then visited St Patrick's Boys' National School in Carndonagh, where he met with students who had successfully participated in the Blue Star Programme, which teaches primary school students about European cultures and the EU, through creative activities and projects. 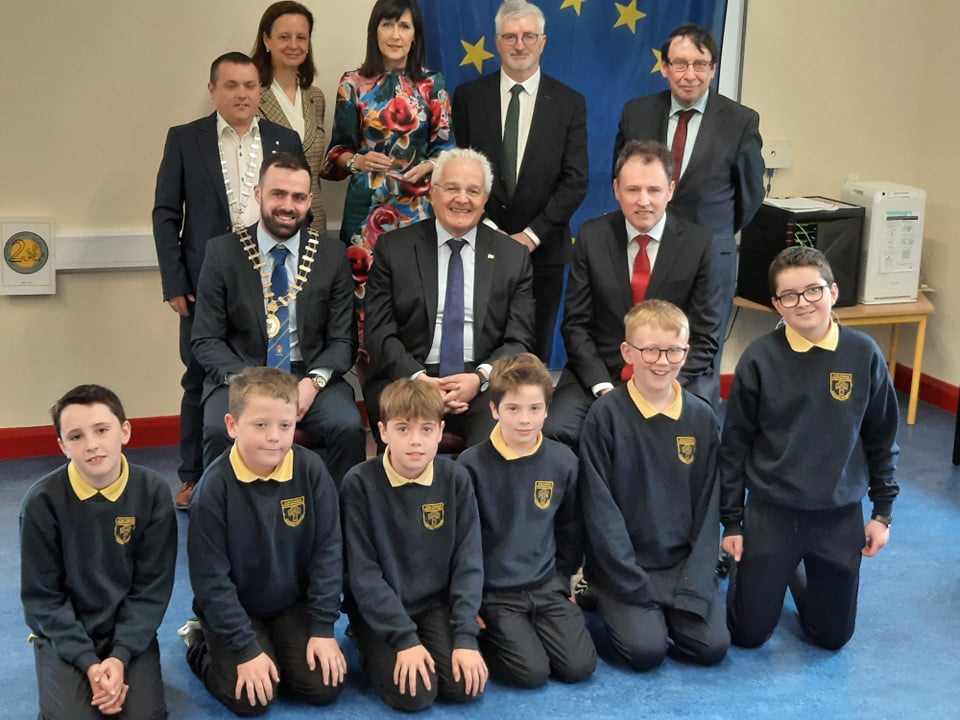 In recognition of their achievement, Ambassador Castro presented the principal, Ms Anne McLaughlin, with the Blue Star Award.

Ms McLaughlin said she was very honoured to accept the Blue Star Award, which she described as “a great credit to our staff and our pupils”.

Addressing the young people, Minister McConalogue said membership of the EU had brought 50 years of great progress to Ireland and had served the country really well.

Welcoming Donegal Cathaoirleach, Cllr Jack Murray; Leas Cathaoirleach, Cllr Martin McDermott; former St Patrick's Boys' School principal, Cllr Albert Doherty; Donegal County Council Chief Executive, John McLaughlin; and his own national school principal, Mrs Sarah McDermott (Culdaff); Minister McConalogue said: “There is very little resemblance between Ireland now and what would have been the situation when we made that decision to join. Everybody's standard of living is so much better, the quality of life is so much better, the things we get to enjoy are so much better as well. 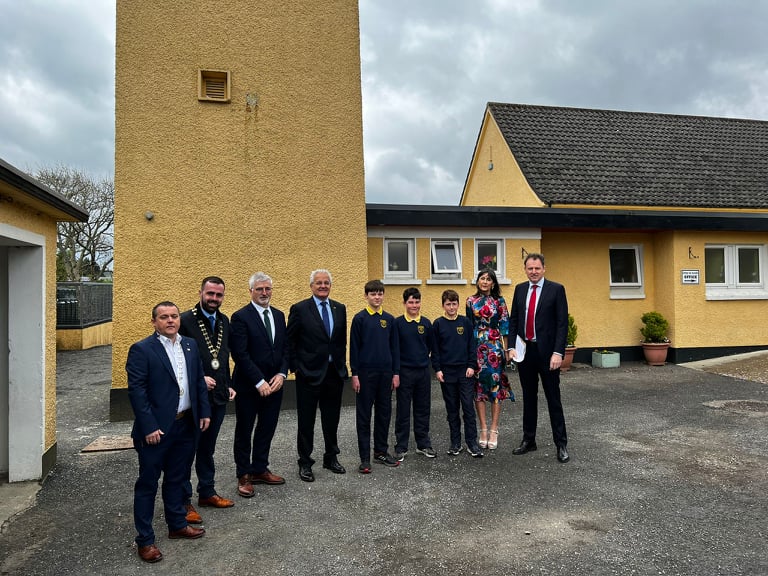 A lot of that is down to the fact our economy has grown really well and developed very well over that time and that has been down to the fact that we have all worked really closely together with outer countries and now, lots of the things we export and make go abroad and that helps to make us financially better off, which allows us to live well together too.

“Another positive is that many of the rights and freedoms that we have had have developed alongside being part of the EU, better legislation around workers rights and the tremendous development we have seen, thankfully, in equality for women, which was not the case 50 years ago, as well as the very strong focus we have on the environment now.

“It is a real pleasure to be here today with Ambassador Castro. Spain has been a wonderful support and friend of Ireland for many, many years. We have a wonderful relationship.”

Ambassador Castro said Spain's entry into the EU marked the end of the dictatorship [of General Franco].
He added: “For Spain, the EU was and still is a safety net. We are more protected in the group. We have friends and allies. A good example is Brexit.

“Ireland, a country suffering a lot as a result of Brexit, felt the full solidarity of the EU countries. And that means, when a group sticks together, you are stronger and you are safer. I think the EU is a very good thing. It has some problems but nothing is perfect. But, our experience as a country, in terms of democracy, respect for human rights, gender balance, economic prosperity, stability, is huge.

“But don't take things for granted. You have to work for democracy, for peace, every single day. No-one expected a war in Eastern Europe, because the Russians invaded Ukraine. The EU has been good for Ireland and Spain and will continue to be.”

The young people present then had an opportunity to ask some very pertinent questions of the Ambassador and the Minister, under the encouraging eye of teachers, Mr John McFeeley and Mr Noel Doherty (Vice Principal).

Oisin Harkin and Ryan McLaughlin asked about the Russian invasion of Ukraine. In response, Ambassador Castro said the Ukrainians were defending themselves against a Russian invasion.

Ambassador Castro said: “Of course they have to use violence because violence is being used against them. But there is a difference, they did not shoot first. They are defending their country. It is completely different.

“Putin is not a good guy. Russia is not a democracy. Usually, when you see war, invasions, violence, between countries, at least one is never a fully fledged democracy because democracies, we try to follow different paths, peaceful paths, and peaceful ways to try to fix our problems.

“So, the invasion, I think, will last, unfortunately, for months, and diplomats should find a way to stop the war and rebuild the country.

“I do respect the Irish position of military neutrality not to supply weapons but to supply non-lethal materials. In Spain we are supplying weapons. Nobody wants to do any harm to anybody but, in this case, the Russians are [the aggressors].

“In my opinion, to supply weapons, to defend a country is a fair option because, unfortunately, they need weapons to protect their land, their homes their families. War is a dangerous place, as US President George Bush once said.”

It turned out, His Excellency supported Atlético de Madrid and his wife supported Real Madrid. 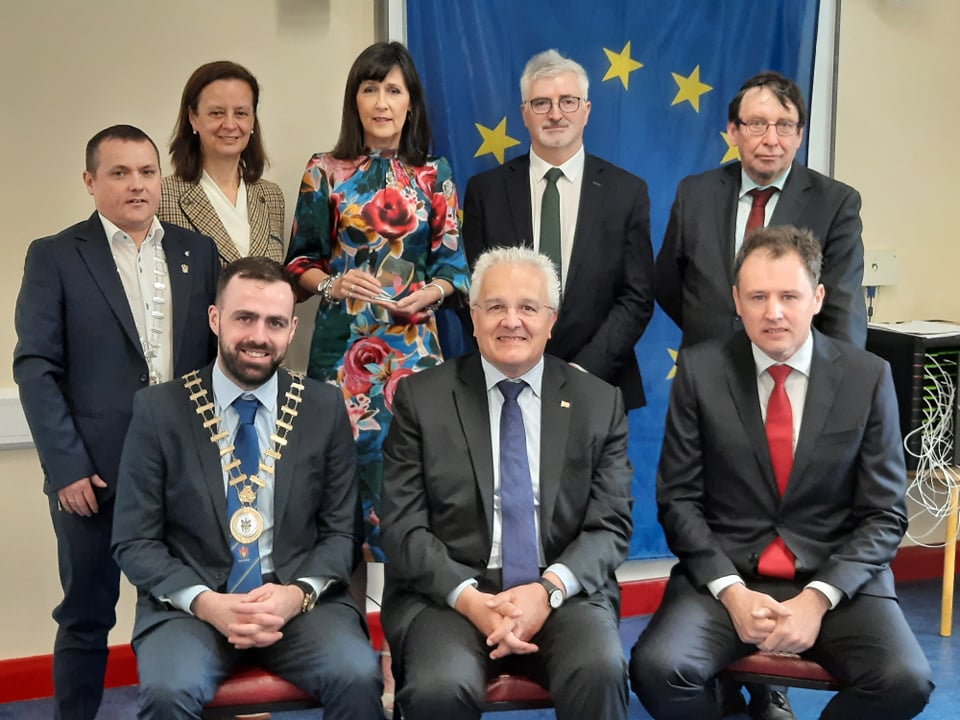