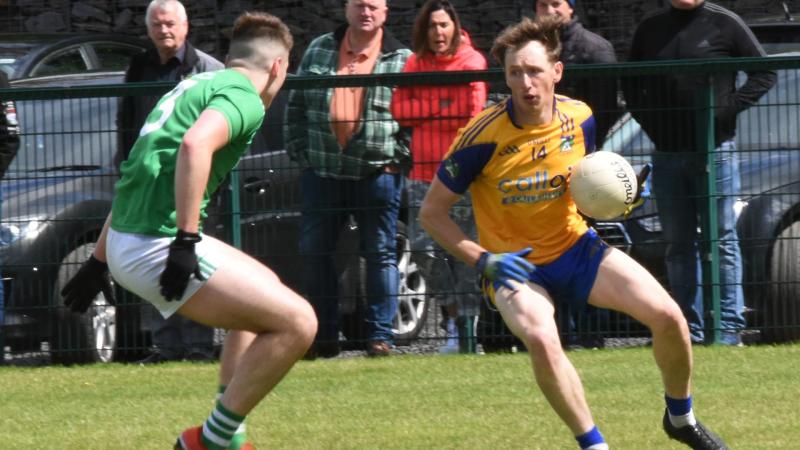 Burt secured promotion from Division 3 with a game to spare following their eight point victory over Na Rossa on Sunday.

Two second half goals from Christopher McDermott helped them win a game that they controlled from start to finish.

The game followed a similar pattern to the win over Naomh Muire a week earlier. Burt played with defensive discipline and patience against the wind in the first half, holding Na Rossa to just four scores, two frees from Aodhan McHugh and a free and a point from Cillian Bonner.

Burt too were dependent on frees in the opening period, with Calvin Gallagher and Sean McHugh (2) on target for the home side who trailed 0-4 to 0-3 at the break.

Team captain Stevie O’Donnell opened Burt’s second half account with a point from the left before McDermott got in for the first of two goals.

Na Rossa were caught trying to play the ball out of defence when Dara Grant got a block and passed to Sean McHugh who lobbed a perfect pass over the last defender and into Cricky’s hands. McDermott rounded ’keeper Martin Molloy and finished calmly to the net for a 1-4 to 0-4 lead. Cillian Bonner responded with a free for Na Rossa, but Burt were in for another goal in the 50th minute.

Sean McHugh won a long kickout from Kieran Brady and released Calvin Gallagher who popped a perfect handpass into Cricky. McDermott cut left this time and finished left-footed for a 2-4 to 0-5 lead.

Burt added further points from play through McHugh (2), Darren Gallagher and Tom Doherty, while Bonner knocked over a late free for Na Rossa.

The win secures promotion for Burt who will play their final league game away to Naomh Bríd next weekend, a dress rehearsal for the league final against the same opposition.

Na Rossa will play Naomh Muire in the promotion play-off, with the winners joining Burt and Naomh Bríd in Division 2 next season.