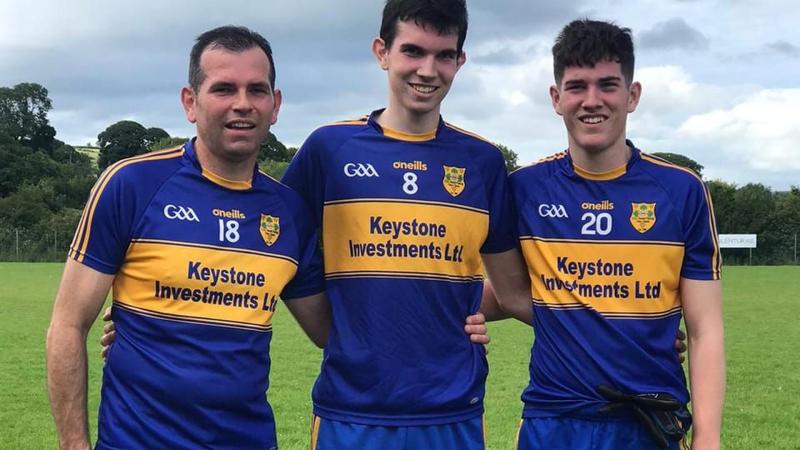 On Father's Day in June, Naomh Pádraig Uise Chaoin held a 'Dads and Daughters /Dads and Lads' non-competitive match to make some memories for families in the area.

One father who took part was 45-year-old Dermot McColgan, who enjoyed the occasion so much, he decided to make a go of it again with the local club having lined out for Buncrana from the age of 14, where he won the Donegal IFC in 1995, All-Ireland Vocational Schools title and then played for Naomh Padraig on formation of their senior side and Donegal up to U-21 level. In more recent times he won an All-Ireland Masters crown with Donegal. So last night he togged out at Ture as Naomh Pádraig welcomed Naomh Bríd in the All-County Football League Division 3.

Dermot was content enough to sit on the bench to begin with, and his son Ronan, 20, was lining up at midfield. In the second half, on came Dermot and then in the latter stages, another son, 17-year-old Cormac, who played county minor last year, was introduced.

In the 1-16 to 2-6 Naomh Pádraig win, Ronan impressed scoring five points, while Dermot put over and three and Cormac completed the family hat-trick by adding a point of his own to bring the family total to nine points. Cormac then played for the Naomh Padraig senior side as they also met Naomh Bríd, scoring two points in their 1-14 to 1-9 loss.

It all made for a proud day for the family, with wife and mother Johanne - a coach from Naomh Padraig Uisce Chaoin, who won this year's  Ulster GAA Translink Ulster GAA Coach of the Year for 2022 - watching on.