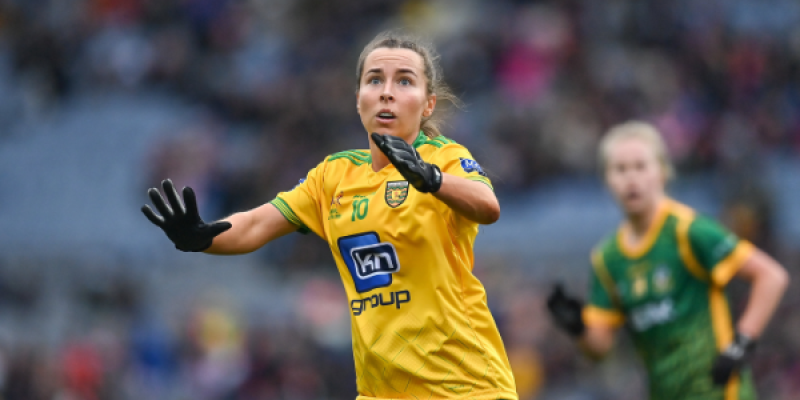 Bláthnáid McLaughlin has been ruled out for several months. Photo: Sportsfile

The Moville woman was forced off in the early minutes of the TG4 All-Ireland SFC game against Waterford in Birr.

McLaughlin was carried off after only six minutes and it has been confirmed that she ruptured an anterior cruciate ligament (ACL).

“That’s her season done, unfortunately. Without a shadow of doubt, she is a massive loss to us.”

McShea's Say: What an amazing Sunday afternoon at Croke Park

In his weekly Donegal Post column, Donegal's 1974 Ulster winning captain Pauric McShea looks back at the epic All-Ireland quarter-final between Galway and Armagh at Croke Park on Sunday

Curran admits that McLaughlin’s absence leaves a ‘massive void’ in his side ahead of Saturday-week’s All-Ireland quarter-final against Dublin in Carrick-on-Shannon.

Curran said: “She had taken on the wing-forward role in recent times and is a real bundle of energy. It isn’t an easy role to play, but she got to grips with it and got her head around it. It leaves a massive void for sure.”

With regard to the rest of his squad, the Donegal boss says ‘everyone else is heading in the right direction’.

“There is a lot of ground to cover between now and the game,” he noted.

Donegal will play Dublin, who defeated Mayo 2-14 to 1-7 to win Group A, in the last eight. The victors from that will play either Galway or All-Ireland champions Meath

Last season, Donegal's All-Ireland campaign ended with defeat to Dublin in the quarter-finals, going down 2-12 to 2-17 in Carrick-on-Shannon and in 2020, Dublin effectively ended Donegal's chances with a 2-13 to 2-10 win in Cavan.

The most recent meeting of the sides came in March in the Lidl National Football League Division 1 semi-final, where Donegal struck late goals through Emma McCrory and Yvonne Bonner to win out 2-8 to 1-10.