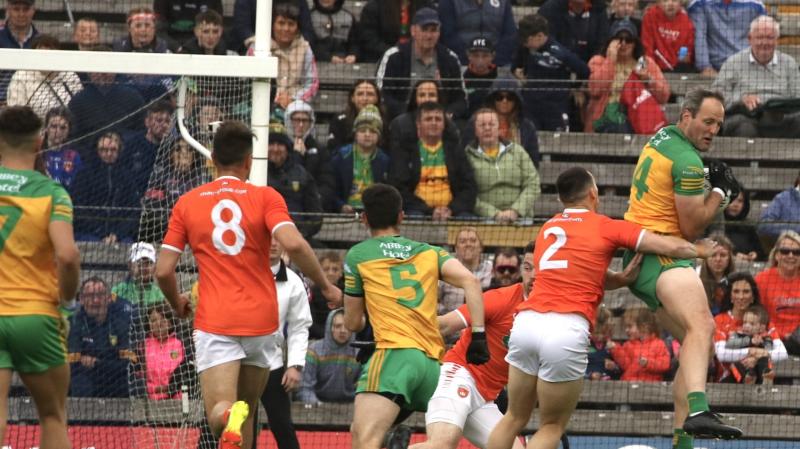 Armagh turned a five-point first half deficit into a winning margin that was definable as a hammering as Donegal fell to pieces at St Tiernach’s Park.

At the final whistle there was a sea of orange on the pitch as Armagh celebrated their first All-Ireland quarter-final appearance in five years, while the few specks of Donegal supporters who were left from the loyal few who had made the trip to Clones trundled out the gates.

For a certain generation of Donegal supporters, their obliteration at the hands of Armagh at St Tiernach’s Park was like something pulled from almost a generation beforehand. This game, despite the jigs and reels, was over long before the final whistle.

To say Donegal pressed the self-destruct button in their hammering at Armagh’s hands in their All-Ireland second round qualifier only tells half the story. Having endured the nightmare start, with Rory Grugan netting the second fastest championship goal in history nine seconds in, Declan Bonner’s side clicked and dominated for the 20 minutes after that to move into a lead of 0-9 to 1-2. But that was as good as it got, with a nightmare conclusion to the half turning the contest upside-down.

Having fared well enough from the tee, Shaun Patton saw two long ones picked off by Armagh, so the Donegal goalkeeper, the slides level at 1-6 to 0-9, went short to Odhran McFadden Ferry, who spilled and with Stefan Campbell moving the ball to Jason Duffy, Caolan Ward made an unbelievable clearance off the line.

From the resultant 45, Rian O’Neill - who would score 1-7 in all - edged Armagh in front but again, Donegal opted to go short and again it was messy, with Brendan McCole not picking up possession, which enabled Aidan Nugent to get on the ball, only to be upended by Patton, who was black-carded.

With Donegal substitute goalkeeper Michael Lynch not having a jersey on and panic ensuing on the sideline, referee Brendan Cawley had enough and ordered the kick to be taken with Caolan McGonagle between the posts. O’Neill smashed home, dispute the Donegal midfielder getting down sharply to his right Armagh were 2-8 to 1-10 in front at half-time with half of Clones left trying to compute just what happened.

Donegal, with Michael Murphy inside, had played excellently for a spell, with Ryan McHugh, Patrick McBrearty, Shane O’Donnell and Ciaran Thompson all scoring. The play at the start of the first half was much simpler, which allowed Grugan a goal. O’Neill won the throw-in and although tugged by Jason McGee, was allowed advantage and planted the ball on top of Grugan, who smashed past Patton from the edge of the square. Only Jack O’Connor’s goal for Meath against Wicklow this year was faster - half a second in fact. Armagh had tried a similar stunt in the Ulster fixture in Ballybofey, with O'Neill seeing a goal disallowed at the start of the second half.

Having beaten Kieran McGeeney’s side two in the last two months - in April in the last Allianz League fixture then in May in the Ulster SFC quarter-final - some felt that, on the law of averages, things might be turning Armagh’s way in the lead-up. They had ousted Ulster and All-Ireland champions Tyrone last weekend, with Donegal limping into the second round qualifier having lost the Ulster final to Derry.

Armagh opened the second half with five scores, through Burns and then O’Neill and Stefan Campbell bringing huge noise from the Hill to move 2-13 to 0-10 in front. Donegal, so fluid in the first period, were constantly stuck and unable to manufacture a cohesive offensive move at all.

With Murphy scoring a free on 52 minutes, it was only his side’s second since the 21st minute. Jason McGee added one soon after and midway through the half, it was 2-13 to 0-12 for the Orchard County. However, Armagh broke to telling effect to score a third goal, with O’Neill feeding Ben Crealy who set up Stephen Sheridan to round Patton for a third goal and a lead of 10, 3-13 to 0-12.

Donegal were totally disjointed late on and there was an inevitability about it. Shane O’Donnell would kick four points in all but at the end, with nothing but the thousands of orange jerseys, it was a sign of one team on the rise, with Donegal continuing their fall. Afterwards, there was no comment from anyone from the Donegal party.