Rory Gallagher helped to lay the foundations for what has been a golden age in Donegal football. On Sunday, now as Derry manager, he'll aim to take down the house he helped to build . . . 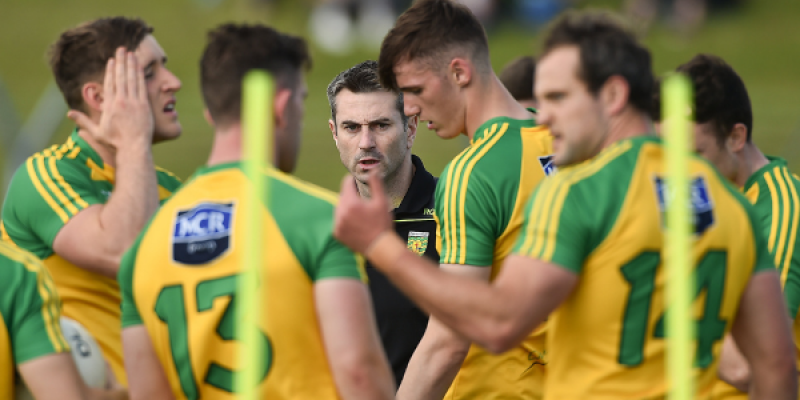 On the grass banking at the old Fintra, the questions came often.

The new regular was as intense as he was inquisitive. He was keen to know anything and everything about those he was watching.

“I watched one or two games with him and he kicked every ball,” Brendan McGuire says. “He was always so clued in, asking who is this or who is that.”

Gallagher is a football obsessive and Killybegs would reap the benefits in later years.

After he stepped down as the Donegal manager in 2017, John Cunningham got him back to Fintra. Killybegs were playing now at the Eamonn Byrne Memorial Park, a stone’s throw from where Gallagher began watching club football in Donegal.

Gallagher was on the line alongside John Cunningham during Killybegs’ rise from Division 3 to Division 1.

McGuire, who is training Derry club Faughanvale and living in Oak Leaf country, isn’t surprised in the slightest that Gallagher has led something of a renaissance.

“I can see similarities between what he’s doing with Derry and what he did with us in Killybegs,” he says. “To be honest, I think if Covid-19 hadn’t have hit and football took a backseat, Killybegs would’ve been a top six team.”

Derry are chasing a first Ulster title in 24 years on Sunday when they take on Donegal. It’s a first provincial final in 11 years for Derry; a first since they were toppled by a Donegal side that had Gallagher prowling the sideline in 2011.

“There’s some buzz about Derry,” McGuire says. “They just love him. People are chatting all the time about it. I’m not one but surprised that he has got the kick out of Derry.

“Rory is ruthless. If you’re not putting in the effort, you’re gone.” 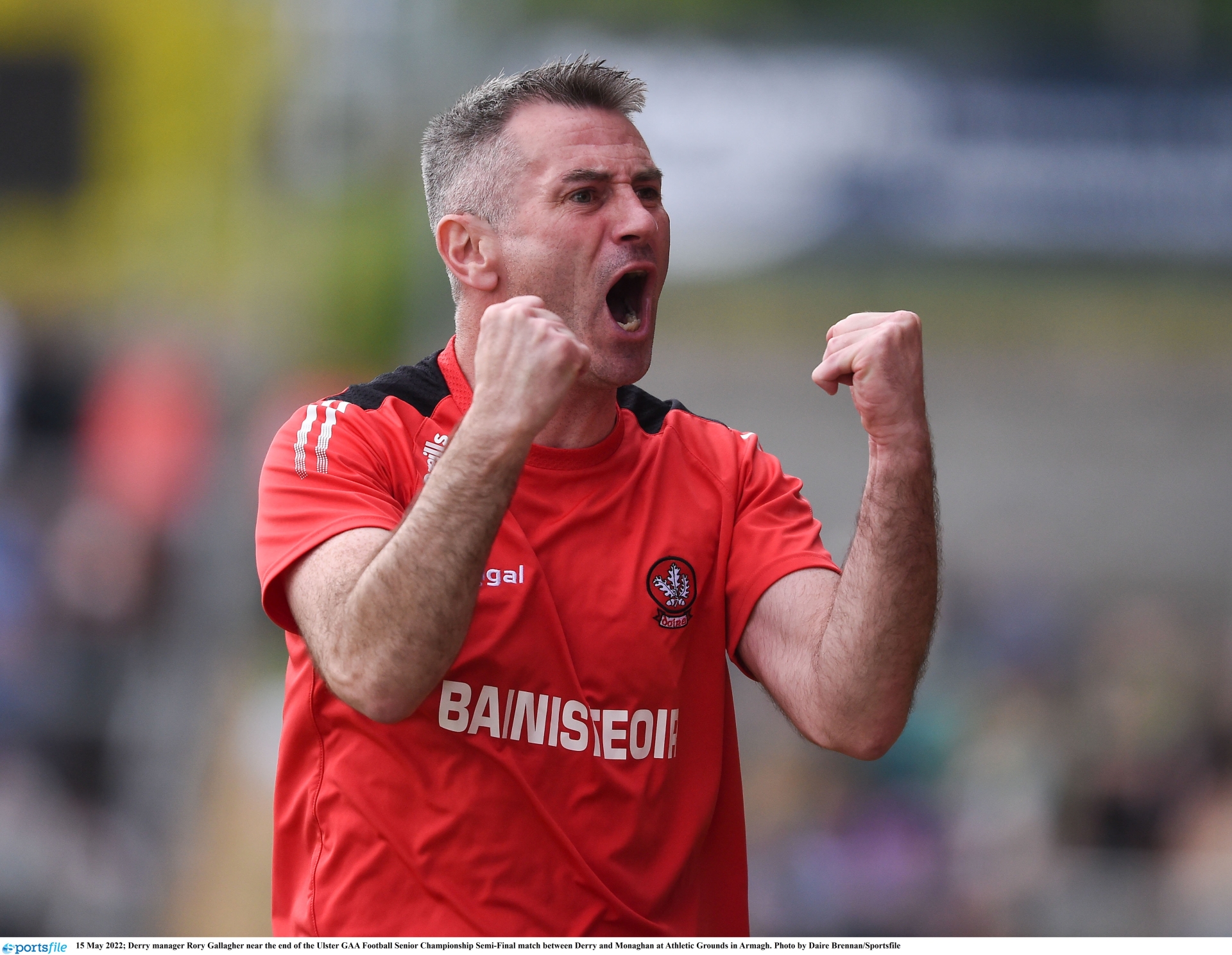 Ciaran McFaul knows all about that. The Glen man was cut from the Derry panel in April with Gallagher confirming that the players’ ‘commitment levels haven’t been what has been needed since the very start of the year’.

It was a move that former Donegal player Rory Kavanagh believes outlines a united Derry.

“It showed the focus,” the 2012 All-Ireland winner says. “They’re united and they’re all together. They had a fair few Glen players who could have said they’d back their buddy, but this shows how united they are. Derry are going to be formidable for Donegal.

“One of his greatest achievements so far has been getting the best players playing for Derry. For years, there was a lot of a club-country divide, but Rory has got a real good core group of players now.

“They’re very fit and yes they have some similarities to what we had in terms of that counter-attacking game. They have real momentum now. Back in 2012, we went out thinking we are not going to be beaten. We had that mindset.”

Despite living in south-west Donegal, Gallagher’s arrival to Páirc Eiméid in Castlefin on a winter’s night in early 2011 still took Donegal’s players by shock.

Michael Hegarty remembered seeing a familiar figure leaning against a wall as he entered for training.

The Kilcar man wondered: ‘What the hell’s he up to?’

Introduced to Jim McGuinness by mutual friend Martin McHugh, the pair hit it off and it son became apparent what Gallagher was ‘up to’.

“Rory was very hands on, even on that night of his first session,” Hegarty says.

“From day one, Rory wasted no time. He really got stuck in. Around half an hour into that first session, we knew we’d struck gold in getting Rory Gallagher on board.”

Gallagher played for Fermanagh in the 2010 Ulster Championship, but his time as a player came to an end.

Peter McGinley, who was with McGuinness for the 2010 Under-21 campaign, was unable to commit to the senior set-up and Gallagher would fill the vacancy.

“He was such an intelligent player himself and he brought that intelligence, and more, to the Donegal dressing room,” Hegarty said of a player whose cheeky chip ended their Ulster hopes in 2000.

“When Jim was putting the jigsaw together, Rory was the missing piece. He was a massive influence on the players.”

Mark McHugh thrived under McGuinness and Gallagher before stepping away and missing the run to the 2014 All-Ireland final. When Gallagher took over from McGuinness, he coaxed McHugh back.

“He opens your eyes to things you wouldn't normally see,” McHugh said after returning to the squad for the 2015 season.

"Rory is the most intelligent GAA man I've ever met. He would tell you about past players and present players from anywhere. He has a real eye for talent. His knowledge of football is unbelievable and his tactical awareness is brilliant.” 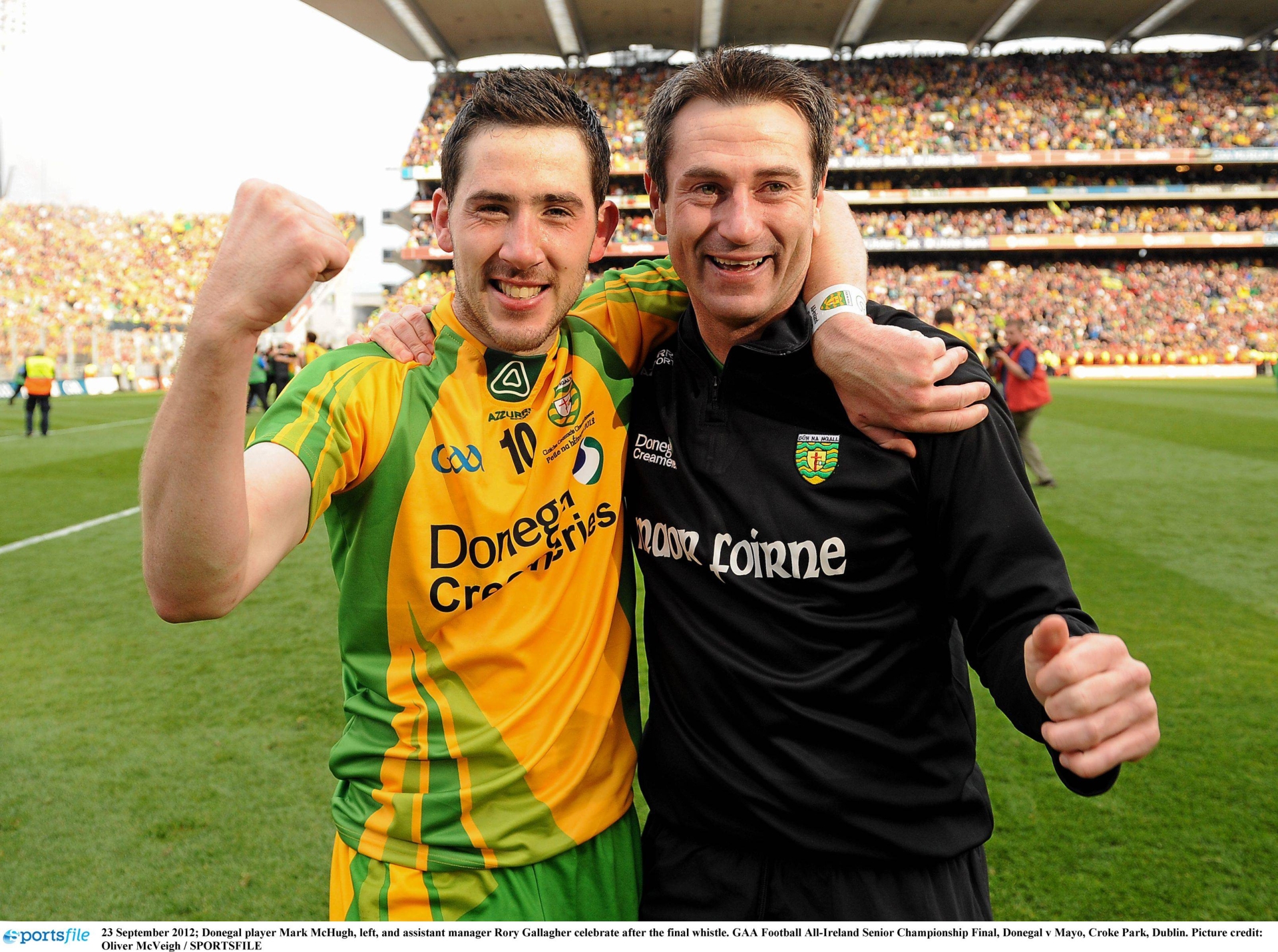 Kavanagh, in his autobiography, Winning, recalled the training and how McGuinness and Gallagher would be ‘like two prized scholars bouncing ideas off one another.’

“Huddles on the field could become a nightmare for us,” Kavanagh wrote. “We might be a half an hour or 45 minutes into our session, and they’d start.

We’d be all grouped tightly around them, listening, and then getting cold, and fed up, and wishing they’d just shut up.”

Yet, Kavanagh added: “They were always brilliant.”

“There was no mad rocket science,” he says.

“He knew the team that he had - and he knew what he needed to do. He knew we needed to be more intense and we had move ball quicker. He was a wild man for angles. He was so smart and he could just see things.”

Most had Gallagher labelled as a defence-minded coach. His approach in Killybegs was a jolt to the natives. McGuire says: “He coached us nothing but attacking football.”

Gallagher is a stickler for detail.

Donegal played Cork in the 2012 All-Ireland semi-final. Donegal had their match-ups nailed down beforehand. But when the teams lined up at Croke Park, Cork threw a few spanners into the works.

Mark McHugh was to be on Noel O’Leary, who took up a sentry aside Ryan Bradley.

“Rory Gallagher was sprinting in different directions out on the field,” Kavanagh wrote.

“Gallagher’s mission before any game commenced was to make sure that everyone was next to the man he had prepared for, and that nobody was at all distracted.”

Gallagher was leaving nothing to chance.

“The game was about to start,” Kavanagh added. “And Gallagher was still at work on the field.”

Killybegs were in the throes of rebuilding when Gallagher got to work.

“Everyone was mad to train when Rory came in,” McGuire says. “Obviously everyone knew him from what he had done, but he brought our training to another level. He was so passionate and he got the best out of you.

“Rory had a real skill in bringing players up to a certain level. The least-talented players, he could improve them to a level. The main players would be looking and going: ‘He got him to there, what can he do for us?’

“I used to love driving from Letterkenny to Killybegs at the time because I was getting better every day.

“Once Rory saw a player in training putting in effort and improving, he thrived on that. Everyone wanted a piece of it. Given the history, going to Division 3 wasn’t something for Killybegs to be proud of, but Rory just came in and gave it a boost.

“We went to having 30 men for training when a year before we were down to 13 or so. His preparation was brilliant.”

When Gallagher took the Donegal job following McGuinness’s departure in 2014, he knew the rebuilding job would take some time.

After defeat by Dublin in a 2015 All-Ireland quarter-final, Gallagher sought a longer term in the role. The jigsaw lost some unexpected pieces and Gallagher would need to unearth some new blood.

The likes of Caolan Ward, Paul Brennan, Jason McGee, Michael Langan, Jamie Brennan and Ethan O’Donnell were given their League bows under Gallagher.

It could be forgotten, given how it all ended with a 4-17 to 0-14 loss to Galway in a 2017 qualifier, just how close Gallagher was to success with Donegal.

His team kicked 11 wides in losing the 2015 Ulster final to Monaghan. By a point.

In a 2016 semi-final, Tyrone came with three late points to win 0-13 to 0-11. With less than two minutes on the clock in normal time, Donegal led by a point.

As he spits into the palms of his hands at 4pm on Sunday, Gallagher will aim to take down a house he helped lay solid foundations for.

Gallagher might be a manager by name now, but as he paces the sideline in St Tiernach’s Park on Sunday, it will be apparent for anyone who doesn’t already know that he’s in his element in a coaching role.

“What I am most interested in is coaching and planning for opposition,” he said after taking the Donegal job. “The nuts and bolts of it, if you like, is still all about coaching the team.”