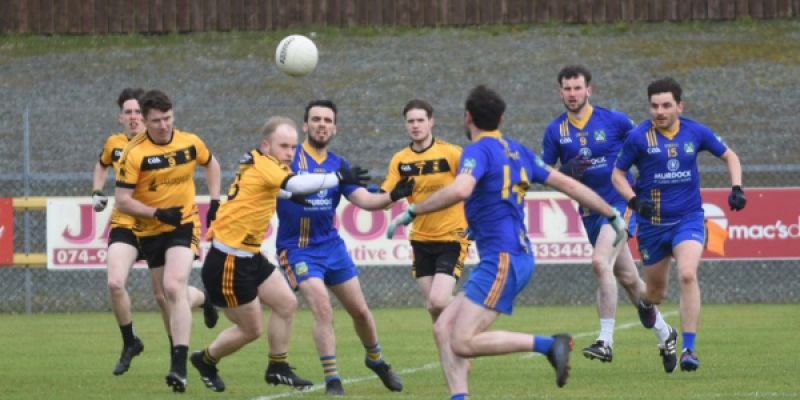 A race for possession at O'Donnell Park. Photo: Geraldine Diver

Burt continued their good start to the Division 3 season with a comfortable win over St Eunan's in damp and dreary conditions this evening in O’Donnell Park.

Sean O’Donnell and Kelvin Gallagher scored the goals in the 16-point win with O’Donnell netting the first three minutes in the game.

The goal at the end of a sweeping move was also the game’s first score as the Inishowen men took the game to the young and inexperienced St Eunan’s side.

Corner forward Gallagher toe-poked home from inside the small rectangle three minutes from the end of a tie dominated by the winners from the off.

Full forward Patrick Tobin scored all of St Eunan’s three points, two of which came from close-range second half frees.

League leaders Burt went into the game with three wins from three outings and they got off to a dream start when O’Donnell rattled the roof of the St Eunan’s net with a pile driver.

But fir two brilliant saves from Chris O’Donnell in the St Eunan’s goals and good defensive play from Sean Halvey, the margin could have been further ahead.

St Eunan’s had to wait until the 26th minute for their only score of the half when Tobin did well to win possession, turn his man and lob over the point.

Burt resumed where they left off on the resumption and they extended their lead out to nine points before Tobin converted from 20 metres of St Eunan’s second.

That was on 41 minutes and by the time the full forward struck for his second white flag on the hour mark Burt were out of sight. Kelvin Gallagher’s goal three minutes earlier was mere icing on another strong finish.