The side from Ture made it two wins from two while their hosts were beaten narrowly for the second week in succession, having lost to Naomh Ultan seven days beforehand 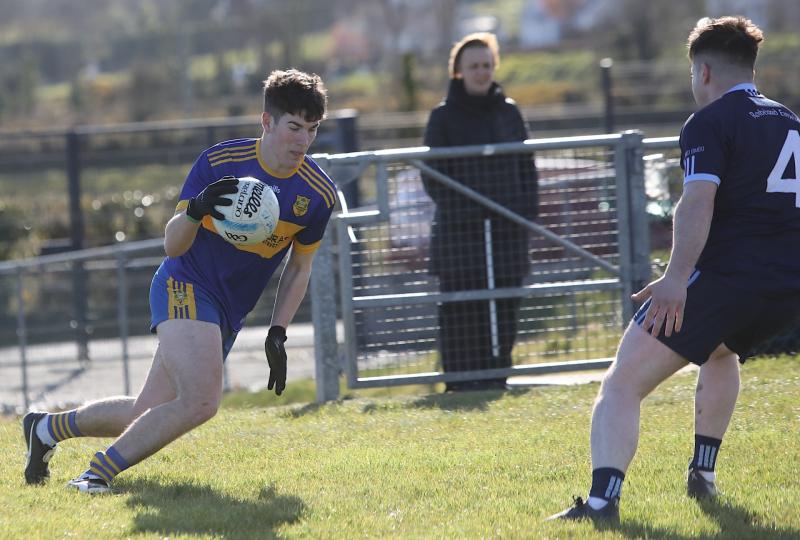 A tight and tense game in Crampsey Park ended in a one point win for the visitors, Naomh Padraig Uisce Chaoin over Urris.

Urris started strongly with a point from Alan Friel after three minutes before Cormac McColgan scored for the visitors three minutes later. Friel struck again in the seventh minutes, and from the resulting kick-out, Naomh Padraig midfielder Eunan
Keaveny collected a high catch and then fell awkwardly hitting his head and had to be replaced by Caolan McColgan, who had played for his county U20s the night before.

Naomh Brid up and running with win over Naomh Muire

Following on from their narrow loss to Naomh Colmcille last week, Naomh Brid posted a home win over Naomh Muire


Dean Harkin put Urris a further point ahead before Cormac McColgan struck again with a point, and then within 30 seconds Aiden Lynch scored a goal for the visitors. This was answered within two minutes by an Urris goal from towering forward Pearse McCarron who palmed a high searching ball into the net. It was Muff who pushed on however, and Jonny Toye, Kevin Doherty and Aiden Lynch scored a further three points for no response before the half time whistle, with the away side 1-6 to 1-4 to the good.

Naomh Padraig dominated the first 15 minutes of the second half with points from two frees from Kevin Doherty and Aiden Lynch. Urris got their first score of the half after 15 minutes, a point from play from Alan Friel.


This was followed five minutes later by a free from Kevin McLaughlin before Kevin Doherty scored Naomh Padraig's last point on 22 minutes to put them three points ahead.

The closing minutes of the game were tense as Kevin McLaughlin on 27 minutes and then Oisin Devlin in extra time scored points for Urris, but it was not enough and when Sean McLaughlin blew the final whistle it was the visitors who went home with the two points.