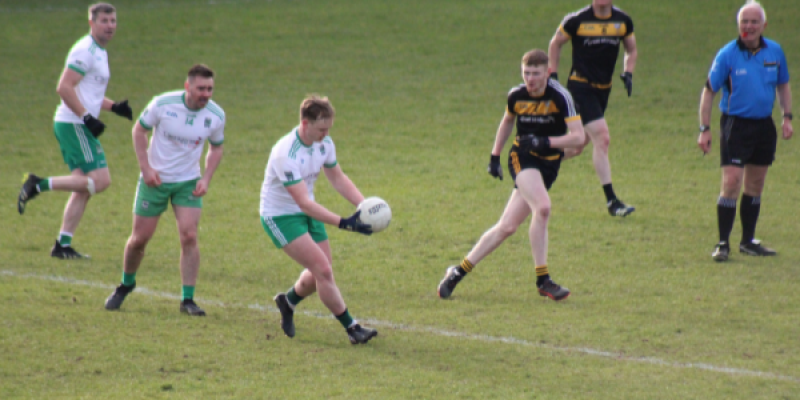 Chad McSorely on the ball for Sean MacCumhaills against Malin. Photo: Chris Doherty

Malin picked up an important win on the road against Seán MacCumhaills on Saturday evening.

Steven O'Reilly opened the scoring from play but the visitors started the more clinical and posted scores from Christy Fildara (2, 1free), Paul Fildara and Josh Conlan.

A trio of Martin O'Reilly frees pulled MacCumhaills level in a really tense game. Malin had a chance to shoot three ahead when a penalty was awarded in their favour after a trip, bu MacCumhaills 'keeper Eoin Gallen pulled off a superb safe to deny Paul Fildara.

A free from Josh Conlan sent the visitors in with a one point lead at the break, 0-5 to 0-4.

Two placed balls from Christy Fildara threatened to take the game away from the home side early on but MacCumhaills found some badly needed composure in possession and points from McSorley, Keegan (2 frees) and Carl Dunnion had MacCumhaills in front.

Malin levelled shortly after through Christy Fildara, who was quickest of the mark after a loose MacCumhaills pass was intercepted.

Another Martin O'Reilly free eked his team ahead again coming up on 50 minutes, but it was the home side’s final score.