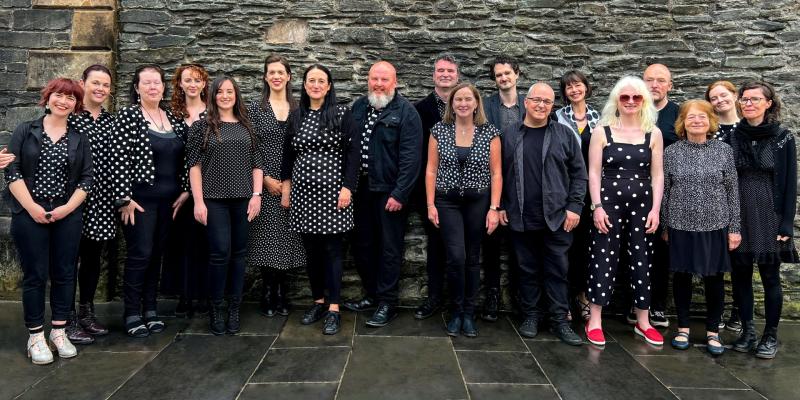 The Inishowen Gospel Choir has returned to the live festival circuit after a Covid enforced absence of almost three years.

The Carndonagh-based singers marked their return to the live festival performances with an hour-long set accompanied by a four-piece band at the Stendhal music festival in Limavady at the beginning of July. The choir performed at one of the festival’s main stages on the Saturday afternoon of the event at Ballymully Cottage Farm.

The performance was the choir’s first at a major outdoor festival since appearing at Electric Picnic in September  2019.

The choir, which was founded in 2005 by two friends who wanted to bring the spirit of gospel music to their community, has returned to regular in-person rehearsals in recent months which have been taking place in Derry and at Colgan Hall in Carndonagh.

Mixing gospel with soul, roots and contemporary music, the community choir has been a regular feature at festivals over the years including Electric Picnic, Body and Soul, Swell and the Dunfanaghy Jazz and Blues festival, as well as local events throughout the north-west.

The choir has collaborated with some of the best-known names on the Irish music scene, including The Henry Girls, Liam Ó Maonlaí, Duke Special, Declan O’Rourke, Bronagh Gallagher, Foy Vance, Cara Dillon and Moya Brennan.

The community choir, which takes its membership from Inishowen, Derry city and north Donegal, is actively seeking new members, in particular men and bass and tenor singers.

“Our door is always open to new singers and we would especially encourage men to come along and try it out. I would recommend the benefits of choral singing to anyone. It is so rewarding on many levels.”

Derry-based musician Neil Burns, who also leads the choir, said the singers are looking forward to taking part in other events over the coming months.

“The separation of lockdown gave us a renewed appreciation of the joy of actually singing together and the importance of the social interactions as well. There is something special about hearing everybody back in the same room singing together.”

Anyone wishing to get in contact with the choir can do so on Facebook and by email at info@inishowengospelchoir.net.